Phivolcs chief: No pattern to location of earthquakes 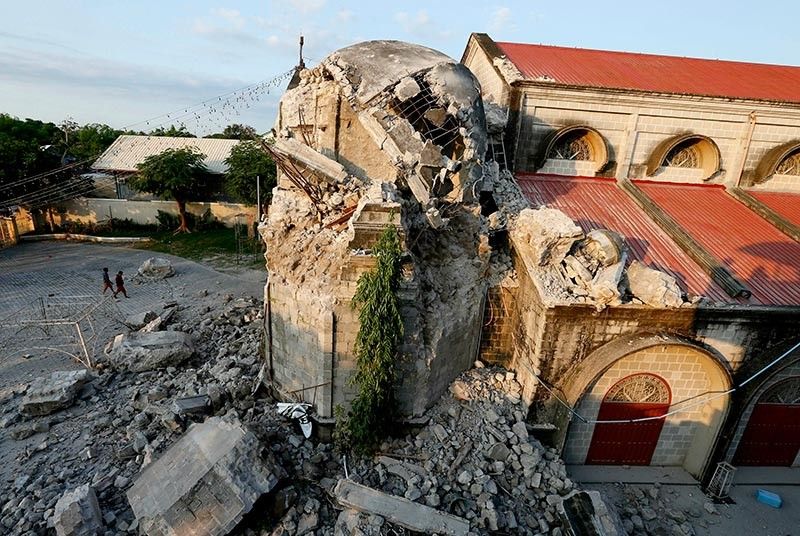 PAMPANGA. The damage of St. Catherine church following a 6.1-magnitude earthquake that also caused the collapse of a commercial building, is seen in Porac, Pampanga, Tuesday, April 23, 2019. (AP)

PHILIPPINE Institute Volcanology and Seismology (Phivolcs) Director Renato Solidum said Wednesday, April 24, that the series of earthquakes that struck Luzon and the Visayas in the last two days do not indicate a pattern.

Neither do these lead to the possibility of stronger earthquakes, Solidum stressed.

(The earthquakes that have struck different parts of the Philippines, particularly those the occurred within 24 hours of each other, are not related. These occurred because of movement in different faults. You cannot use this as basis for saying that a stronger earthquake will occur.)

(There is no pattern to this because there are so many active faults and trenches. It is not surprising that numerous earthquakes occur in a day or that these occur one after the other.)

About 20 hours later, a magnitude 6.5 quake struck near San Julian, Eastern Samar at 1:37 p.m. Tuesday, April 23. It was felt in other Visayas islands, including Cebu.

As of 7 p.m. Tuesday, Eastern Visayas police said 10 people were injured. No fatalities were reported. There was also minor damage to houses and infrastructure facilities.

Solidum said the eastern Samar earthquake was caused by the downward movement of Philippine sea plates along the Philippine Trench, which moved quickly from offshore in Bicol to offshore Davao Oriental.

He said it is normally not expected to cause damage, although it is stronger than the April 22 quake centered near Castillejos, Zambales.

Solidum said the Phivolcs recorded 53 aftershocks of the Samar earthquake. He said intervals between the quakes would be longer.

Phivolcs has recorded about 500 aftershocks to the Zambales quake, with magnitude of up to 3.4. That quake was felt strongly in Metro Manila and caused the 24-hour shutdown of the Clark International Airport and suspension of MRT and LRT operations.