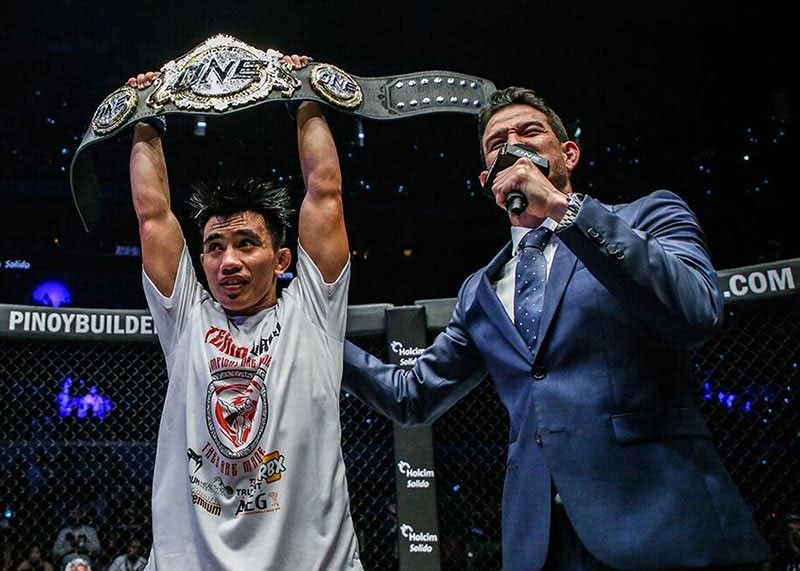 LONG WAY TO THE TOP. After recapturing the ONE starwweight world title a few weeks ago, Team Lakay coach Mark Sangiao believes Joshua Pacio has yet to reach his full potential. One Championship photo

AT THE age of 23, Joshua Pacio may have conquered the world.

But Team Lakay coach Mark Sangiao believes the two-time ONE Championship strawweight world champion has yet to reach his full potential.

Sangiao, according to ONE Championship, said Pacio’s accomplishments at a young age plus his professionalism can be one of the world champions who will be able to hold on to his title for a very long time.

“Though Joshua was able to beat one of the best athletes in his division and is now the reigning world champion, he still has not reached his full potential, and there are still a lot of things he needs to work on and experience before we can say that he is the best strawweight athlete in ONE Championship,” Sangiao said.

The Team Lakay guru added given that Joshua is currently at the prime age of a martial artist, what happens next in his career would be up to his discipline and decision-making.

“Give him another two to three years in his current division, and he may follow the steps of Martin Nguyen where he can go up a weight class,” Sangiao added.

Sangiao was elated after Pacio recaptured one of the four titles the team has lost this year.

“I do believe that this is the start of Team Lakay’s comeback. We jokingly pointed out that Joshua was the first in our roster to surrender his World Title and now he is the first to win it back,” Sangiao quipped.

The former Southeast Asian Games wushu medalist added Team Lakay, after their unfortunate run during the first quarter of the year continue to pray and work hard for the best, adding “this is mixed martial arts where anything can happen, and the decision as to who gets to fight who is something that is out of our hands.”

Sangiao added Team Lakay is constantly training to make sure that everyone is prepared and hopefully everyone will retrieve their world titles.

After Pacio lost the belt to Saruta in January, Eustaquio yielded the belt to rival Adriano Moraes while Folayang fell against Shinya Aoki as Belingon lost via disqualification to Bibiano Fernandes.