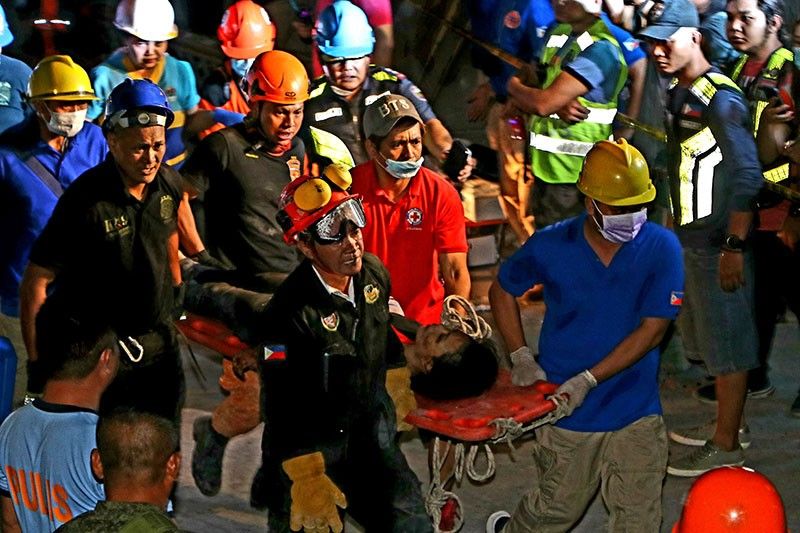 PAMPANGA. Rescuers revive an earthquake victim who was pulled out of the collapsed Chuzon Supermarket in Porac, Pampanga last Monday, April 22, 2019. The woman employee was later taken to the JBL hospital for treatment. (Photo by Chris Navarro)

CITY OF SAN FERNANDO -- Chuzon Supermarket's structural design, having been constructed with four floors instead of two, may have contributed to its weak resistance to the 6.1-magnitude earthquake that hit Luzon on April 22.

"I asked around and this could be because of the structural design of the supermarket. It is only good for a second floor, but it was actually constructed up to fourth floor," said Local Government Secretary Eduardo Año during Tuesday's (April 23) briefing with President Rodrigo Duterte at the Pampanga Provincial Capitol.

It was learned that the Chuzon building in Porac town was only built four years ago.

Duterte expressed worries that the contractor, who built the Porac branch of the supermarket, could have also constructed the rest of the branches in Pampanga.

"So it would be good at this time to just give them the advice to stop, cease and desist in doing business until such time that the clearance given by government, whether city engineer or whoever is competent to review the planning," Duterte said.

The Criminal Investigation and Detection Group on Tuesday already summoned the owner of the supermarket.

Chuzon Supermarket is owned by businessman Samuel Chu. It has four branches in Pampanga (Sto. Tomas, Apalit, Guagua, and Floridablanca), one in Gerona, Tarlac and one in Mariveles, Bataan.

In Guagua, the municipal engineer has temporarily suspended the operations of the Chuzon Supermarket branch there.

Pampanga Governor Lilia Pineda expressed similar concern, adding she had asked the provincial engineer to also make similar investigations and to check if the building had complied with all the necessary requirements for construction.