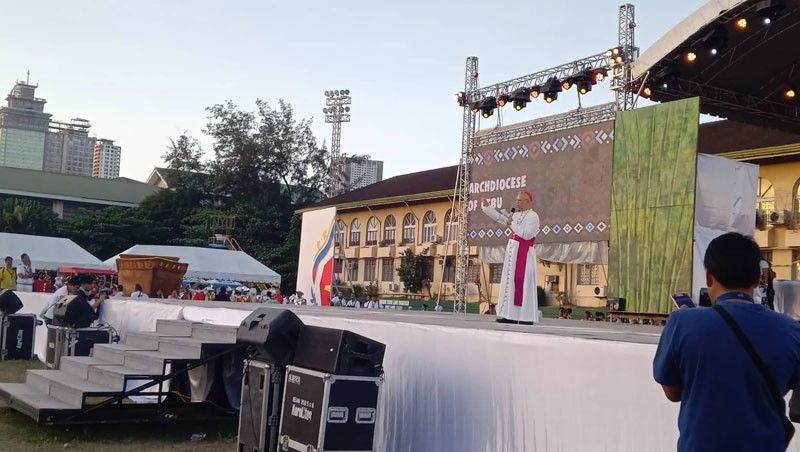 In his message, Palma thanked the youth for braving all the obstacles in coming to Cebu.

“Despite the earthquake, despite the delay of flights, you are here and we are very happy,” Palma told about 6,000 delegates who gathered at the sports center.

Delegates of the weeklong religious event were unfazed despite the earthquakes felt in Luzon and Visayas in the last two days.

On Monday, April 22, a magnitude 6.1 earthquake rocked Central Luzon and Metro Manila at 5:11 p.m., killing at least 16 people and damaging some churches and vital infrastructure facilities.

About 20 hours later, a magnitude 6.5 quake struck near San Julian, Eastern Samar at 1:37 p.m. Tuesday, April 23. It was felt in other Visayas islands, including Cebu.

Fr. Joselito Batitoy, Festival Sites Over-all Chairman, said most of the delegates that he talked to said they would actively participate in all NYD activities.

“Although there were some delays in their coming over, ang nakanindot lang, tungod sa atong communication line karon nga paspas kaayo (what’s nice is that with our speedy communication these days), once they arrived, I could see the pilgrims talking and reporting to their parents saying nga ‘okay ra mi diri (we’re okay here),” he said.

According to Police Captain Alden Zambrano, team leader of the CCSC area security, not less than 6,000 pilgrims joined the opening ceremony.

Rochelle Galu, a delegate from the Archdiocese of Pasig, said before leaving for Cebu, Metro Manila and part of Central Luzon were hit by an earthquake, but she chose to be positive and went ahead for the NYD.

“No, I didn’t feel the earthquake yesterday (April 23). Because of exhuastion, I slept the whole day. Actually before we left, there was an earthquake in Bicutan, so we were really anxious. We had doubts about leaving the family, but like Mary said still yes!” she said.

Police Regional Office 7 Director Debold Sinas, in a separate interview, said that after Tuesday’s earthquake, he called all the chiefs of police to coordinate with local police and coordinate with the disaster risk reduction teams of the different municipalities to include earthquakes in their contingency plans.

“Last night, I already talked to Cebu City, Mandaue and Lapu-Lapu in support of this occasion,” he said.

Bishop Leopoldo Jaocian, SVD, DD-CBCP-ECY, said a prayer for the earthquake victims in Castillejos, Zambales and San Julian, Eastern Samar will probably be included in the NYD activities.

“The delegates from Pampanga and Zambales are already here,” he said.

Markchael Naranjo, a participant from the Diocese of Maasin, said though there were a few glitches in the transport from their foster house to the activity venue, his first day for the NYD was generally good.

“Although naay kakulian gamay, kami nala’y ni-adjust tungod sa kadaghan sa delegates. Kasabot ra man mi,” he said. (Although there were some hitches, we just adjusted due to the number of delegates. We understand.)

“We requested additional security on Day 1. They were able to provide it immediately. They were also strict with the IDs, so that was okay,” he added.

The San Diego Dance Company, Tribu Cogonanon and Banay Labangon each offered a short Sinulog dance after a short presentation highlighting how Cebu has become the cradle of Christianity.

A solemn procession from the CCSC to the Basilica Minore del Sto. Niño followed the NYD opening ceremonies. (WBS)