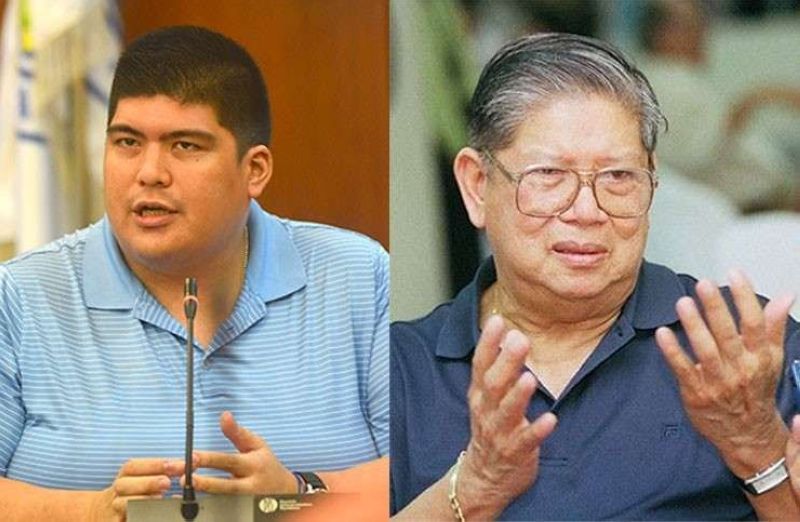 THE patriarch of the Quisumbing clan has ended months of speculation that he is not supporting his grandson, reelectionist Mandaue City Mayor Luigi Quisumbing.

Norberto Quisumbing Jr., businessman and founder of Norkis Trading and Norkis Group of Companies, issued a statement on Wednesday, April 24, declaring his full support for Rep. Jonas Cortes, who is challenging Luigi for the mayorship on May 13.

“I now put my vote and now support Jonas Cortes as mayor of Mandaue City and the rest of Team Mandaue because I believe Luigi no longer deserves to be Mayor as he has been corrupted by greed and influence. Too much power went to his head and he is now managing Mandaue City wrongly in every way,” Quisumbing said.

Sometime in October 2018, Luigi issued a denial that he was not in good terms with his grandfather.

The rift may have stemmed from Luigi’s closure of a bar owned by his cousin Kyle Quisumbing Bravante in February last year. Kyle’s mother, Pinky, reportedly resented Luigi’s move.

Quisumbing said he would have stayed neutral in the mayoralty race between his grandson and Cortes but changed his mind because Luigi “has chosen to delve into dirty politics, character assassination and negative campaigning.”

The elder Quisumbing was reacting to a social media post about a supposed drug matrix in Mandaue City which named his daughter Pinky as “Ecstasy Queen,” and Kyle, who owns Sentral (presumably the Sentral Bar and Lounge which was ordered closed by Luigi in February 2018).

The matrix which bore the text “Ecstasy ug Drug Trading sa Mandaue” has been circulating online since early April this year.

The matrix alleged that Sentral was closed “due to drug infestation,” and tagged Kyle and a “son of Peter Lim” as Sentral co-owners.

The patriarch said this was the last straw for him.

“(This is) an accusation which is not only very far from the truth but also very dangerous. Most candidates do not go as low as what Luigi has allowed to happen. Most politicians have good standards of competitiveness and honor against each other and will never do what Luigi has allowed to take place,” Quisumbing said in an interview on Wednesday.

“This character assassination against Pinky, Kyle and Jonas is totally unfair and untrue. I am surprised why Luigi allowed such statement like this, saying that these three are involved in drugs when obviously they are not. None in my family are involved in drugs at all. So, this time, I have to come out and tell everybody whom I prefer to run for mayor of Mandaue City. Jonas Cortes should be returned back to mayorship because he is fair and efficient in his work,” Quisumbing said.

He said if Luigi had nothing to do with the black propaganda against his aunt and cousin, he could have denied and condemned it, instead of being silent.

Superbalita Cebu tried to get in touch with Mayor Quisumbing, but as of Wednesday night the calls were not returned.

As to the bar closure, the elder Quisumbing said there was no logical and legal basis to close it. He said Luigi should have consulted him before closing the bar of Kyle, who is his first cousin. He said the most Luigi could have done, if there were violations found, was to suspend it.

The mayor, he said, even refused to meet Pinky and Kyle, who wanted to see him to explain their side about the bar.

“Luigi got more money from us than his cousins through his political campaigns. His cousins are not asking money from us and they are on their own. We did not spend a single centavo for his cousins. But he (Luigi) got the most favor from us,” Quisumbing said.

The elder Quisumbing also said it was then mayor Cortes who presented to them in 2015 that Luigi should run for mayor as his third term was about to end.

“I was present when they talked to each other. The three of us were there when he (Luigi) said he was only good for one term because he preferred Congress. When he won as mayor, he became different and became another person,” he added.

“I don’t know what Luigi is doing. I understand, it’s difficult to see him and get an appointment with him. So, I am supporting Jonas for mayor, Glenn Bercede for vice mayor, Glenn Soco and Jonkie Ouano for board members, Lolypop Ouano for congresswoman, and their entire group,” Quisumbing said.

He said that when Luigi won as board member, congressman and Mandaue City mayor, he never even said “thank you” to him, despite the millions of pesos that he spent for his political career.

“If he is ungrateful to me as his grandfather who supported him all the way and spent hundreds of millions of pesos for his political career, the people of Mandaue City cannot expect good governance from Luigi,” he said.

He said that Luigi’s change in behavior is a matter of character. His true character came out when he became a mayor.

“We know this decision has not been an easy one for the patriarch of the Quisumbing family. However, we also believe that this decision was also based on the reality which also affected the whole City of Mandaue under this current administration,” Calipayan, who is Cortes’ chief of staff, said.

“The divisiveness of Luigi’s actions has clearly now taken its toll. I believe that this should also be considered by every Mandauehanon in their decision on who will lead Mandaue into the future,” Calipayan said. (EOB with FMD of SuperBalita Cebu)