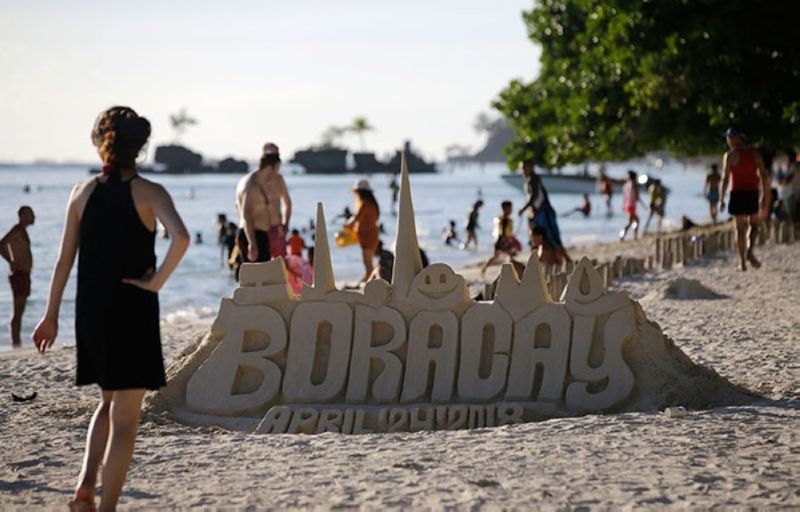 BORACAY. In this photo taken in April 2018, tourists enjoy the beach in Boracay in the last few days before the island was closed to tourists to pave for its rehabilitation. (File Photo)

THE Department of the Interior and Local Government (DILG) served on Wednesday, April 24, the dismissal order against Malay, Aklan Mayor Cicero Cawaling and another town official over Boracay’s environmental crisis.

DILG Secretary Eduardo Año said the dismissal order stemmed from the order of the Office of the Ombudsman which found Cawaling and Aklan Licensing Officer Jen F. Salsona guilty of grave misconduct, gross neglect of duty, conduct unbecoming of a public official, and conduct prejudicial to the best interest of service.

He said the Ombudsman, in its decision, found substantial evidence against the two considering that during their incumbency as local government officials, some establishments operated without the requisite fire safety inspection certificate and some did not even possess the necessary permits.

He said some of the businesses also encroached upon the 25+5 meter easement and violated Malay Municipal Ordinance No. 2000-131.

“By not implementing this Ordinance, Cawaling violated Section 444 (b) (2) of Republic Act 7160, which commands him to enforce all laws and ordinances relative to the governance of the Municipality of Malay,” the Ombudsman decision, which was approved on April 22, stated.

With the Ombudsman’s order, the DILG chief said Cawaling and Salsona’s retirement benefits except their accrued leave credits are forfeited and they are also perpetually disqualified for re-employment in any government agencies.

The Ombudsman order is in relation to the administrative charges filed by the DILG against Cawaling, Salsona and 18 local government officials based on the findings of the Boracay Investigating Team which was activated after President Rodrigo Duterte ordered the clean-up of the said island which he then described as a “cesspool.”

The Office of the Ombudsman initially ordered a six-month preventive suspension, without pay, for alleged violation of the Local Government Code or Republic Act 7160 and the Anti-Graft and Corrupt Practices or Republic Act No. 3019.

Malaya said they hope that what happened to Cawaling and Salsona serves as a warning to all local officials that violation of environmental laws has serious repercussions.

“We hope that other LGUs will now be more proactive in protecting the environment and will not wait for the DILG to file cases against them. We urge other LGUs especially in the Manila Bay Watershed area to take their responsibilities seriously and work closely with the DILG in the rehabilitation and clean-up efforts,” he said. (SunStar Philippines)