Luigi to Grandpa: No one is above the law 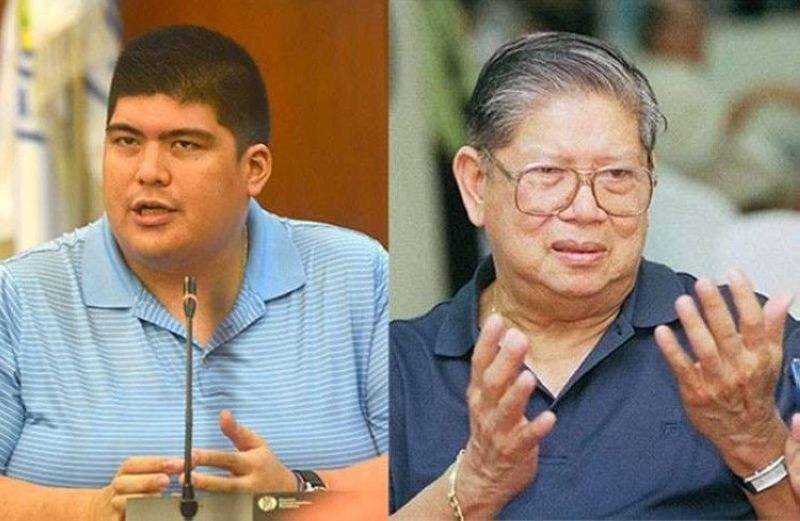 CEBU. "I have and will always put Mandaue City above self" was the answer of Mandaue City Mayor Luigi Quisumbing (left) to his grandfather, Dr. Norberto Quisumbing, who is junking him in favor of his rival, Cebu Rep. Jonas Cortes (Cebu, 6th). The elderly Quisumbing accused his grandson of failing to consult him when the former decided to close a bar owned by a relative last year. But the younger Quisumbing replied that no one is above the law, whether friend or family. (SunStar file photo)

MANDAUE City Mayor Luigi Quisumbing vowed he will not favor anyone, whether friend or family, if it compromises the interest of the city especially in issues concerning peace and order, illegal drugs and good governance.

The mayor made the statement after his grandfather, Dr. Norberto Quisumbing, announced he is no longer supporting his grandson on his reelection bid and will instead support the former's rival, Cebu Rep. Jonas Cortes (Cebu, 6th), for the mayoral seat of Mandaue City.

The elderly Quisumbing claims his rift with his grandson started when he ordered the closure of the bar owned by one of his cousins.

But for the younger Quisumbing, his decision to close the establishment owned by Kyle Quisumbing Bravante was "difficult" but borne out of deep discernment and consultation with various departments of the city including the Mandaue City Police Office (MCPO) and the Philippine Drug Enforcement Agency (PDEA).

"I respect my Lolo and have always been grateful for the support that he has given to me and to our family. However, I am now the father of the City with a duty to protect and preserve it," the younger Quisumbing said, in a statement sent to SunStar Cebu.

He assured his constituents that as mayor, he wants to govern his city as fairly and justly as possible with the law "applying to all and not exempting a favored few like a member of my family."

"To do otherwise will be unjust to those who have less or have none. I pray to my departed grandmother who has been the anchor of our family to enlighten my Lolo and let him realize I am doing this for the good of the city and to keep alive his legacy of excellence, honesty and integrity," Quisumbing said.

He also questioned the timing of the release of his grandfather's statement and called it a "manipulative attempt" to control the damage of the plunder and corruption committed by Cortes.

"All at the expense of my family. I am hopeful that the differences within our family will be healed in time. But one cannot heal a crime of plunder committed against the people of Mandaue. Unfortunately for Jonas (Cortes) he will have to face this on his own," Quisumbing said.

"I will leave it to the people of Mandaue to decide how I have run this city in the last two years. No friend or family will be favored when it compromises the interest of the city especially in peace and order, good governance, drugs and fight against corruption. I have and will always put Mandaue City above self,” he added. (JKV)