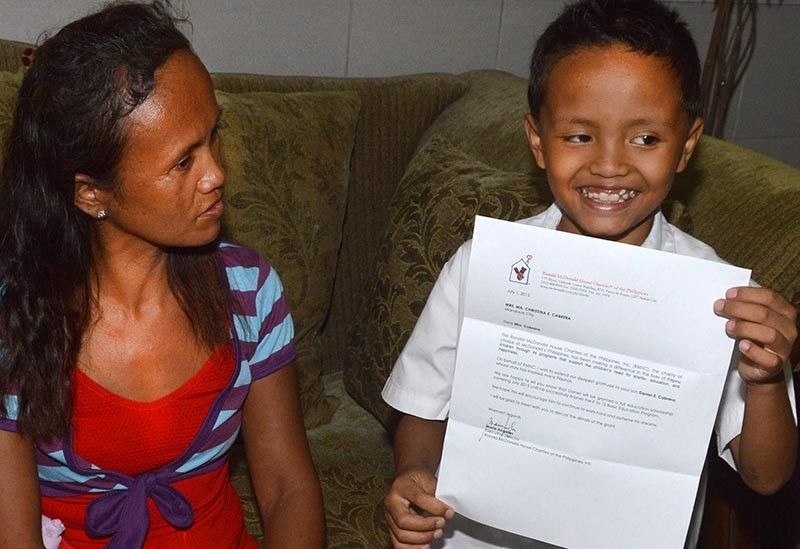 FINALLY, a light came to Daniel “Biboy” Cabrera, the boy who used to study under the lights of a fast food chain in Mandaue City, when he graduated from elementary school in March.

The mathematics-inclined Cabrera, who was then nine years old when a photo of him went viral on social media, said he was still very happy even if he did not get a medal or special award during graduation.

“Most of those who have honors are those active in camping,” Cabrera said in Cebuano.

To become a policeman is the ultimate dream of the young Cabrera, but he doesn’t like to go camping like the boy scouts do since he finds it dangerous.

Cabrera said it is not necessary for a policeman to bring himself to danger. A policeman only needs to do his best to protect the people.

“If you enter risky situations, you will not reach your dreams,” the now 13-year-old Biboy said.

“I prioritized his clothes, so he would wear a brand-new one,” Espinosa said.

Biboy’s graduation is very important for his mother who said that among her six children, Biboy is her first child to reach high school. Biboy is the fifth among six siblings.

Since going viral with his photo, Cabrera has been grateful for the blessings he got from the people who helped them. “I know God will also help them,” he said.

The 2015 viral photo opened many opportunities for him, including a scholarship grant from Ronald McDonalds House of Charities Philippines for his elementary school education and a college scholarship awarded by Samuel Pagdilao of the Anti-Crime and Terrorism through Community Involvement & Support (ACT-CIS) partylist.

Cabrera was also grateful when they got a power connection at home. But there are still days he goes to McDonalds because he is already used to it.

Fr. Carmelo Diola of Dilaab Foundation Inc. also helped his family get a house. He said they will be moving there next year, but as early as now, Biboy admitted he doesn’t want to transfer since he will be missing his friends.

More than the opportunities of free education, Cabrera was also elated by the thrill of riding a plane for the first time when he went to Manila for an interview on national television.

Now that he is going to high school, Biboy said he will do his best to finish his studies and face the hardships he and his family will encounter for the following years he will be studying high school. (JJL)