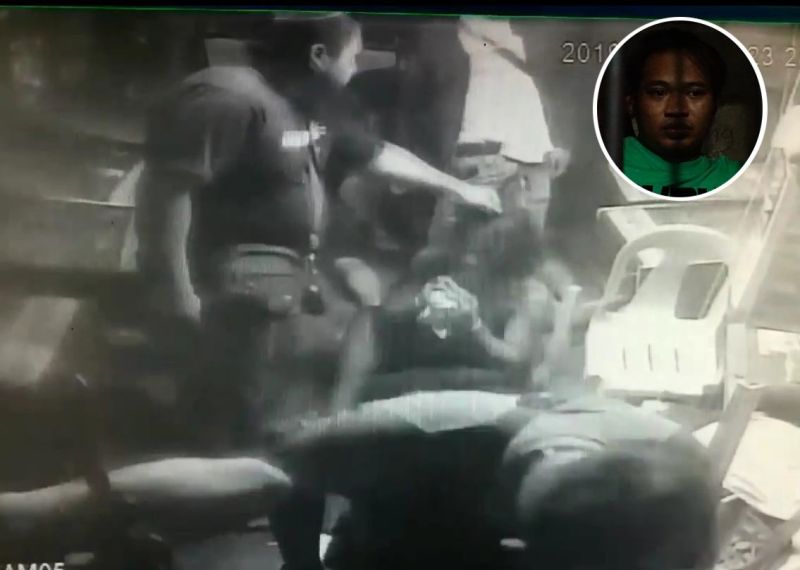 MAULING CAUGHT ON CAM. This is a screenshot of CCTV footage sent to Superbalita Cebu showing a man being mauled by a group of people bearing firearms. The video sender said the subject of the beating was Eddie Basillote and that the armed men were from the Talamban Police Station. Station chief Police Major Elisandro Quijano confirmed they had arrested Basillote (inset, shown detained at the Talamban Police Station) in a drug bust on April 18, 2019, but denied that his men were the men in the video. (SunStar photo / Alex Badayos)

A VIDEO showing at least six armed men mauling three persons during what appeared to be a police operation is circulating online.

Cebu City Mayor Tomas Osmeña, who has been critical of the police, said the video showed police brutality. He offered a reward to anyone who could identify the operatives in the 7.25-minute video, saying he would give P100,000 for every policeman identified.

“Ipaklaro usa kung operatives na sa Talamban (Let them prove the operatives are from my station),” Quijano told SunStar Cebu after confirming that he had seen the video online.

“We have nothing to worry (about). We’ll see each other in court if they want to make an issue out of it,” he said in Cebuano.

Quijano also confirmed that they arrested Eddie Basillote, 28, during a buy-bust in Sitio Nasipit last April 18.

The video showed armed men using their fists, elbows and the butt and nozzle of their long firearms to maul three persons in what appeared to be the inside of an internet cafe as there were several computers, tables and chairs. The video was forwarded to Superbalita Cebu Thursday, April 25. The same video was posted by Osmeña on his Facebook account.

A young mother with a toddler was seen in the video. Another woman appeared but was told to move back by an armed man.

It appeared that the focus of the armed men was the one they were seen bringing out at the end of the video.

The person who submitted the video is a friend of the family of the one who received most of the beating. This person asked not to be named for security reasons but said the armed men were from the Talamban Police Station and the person they arrested was Basillote.

SunStar Cebu checked with the Talamban Police Station and saw on the police blotter that Basillote was arrested last April 18 in Sitio Nasipit for allegedly selling and possessing illegal drugs. The blotter also showed that Police Staff Sgt. Reoven Carmelo Rotawas, head of the station’s Drug Enforcement Unit, was the one who arrested Basillote.

Quijano said that although Basillote was not on the station’s drug watch list, his name was often associated with possession and selling of illegal drugs. “Sa mga dinakpan namo, siya pirmi itudlo nga (People we’ve arrested for drugs always pointed to him as being) involved,” he said.

Basillote, interviewed inside the jail, refused to comment when asked if he was one of the three men mauled in the video. But he admitted he used to sell illegal drugs, but he stopped in 2016. He said he was arrested last April 18 inside his residence at Ponce 2 in Barangay Carreta, and not in Talamban as reported by police.

“I stopped my illegal drug activities in 2016, but I didn’t surrender under Oplan Tokhang,” he said in Cebuano.

Quijano said a case was filed against Basillote for violating Sections 5 and 11 of Republic Act 9165, or the Comprehensive Dangerous Drugs Act of 2002, and that the latter was brought to the Cebu City Medical Center for a check-up on Thursday around 2:30 pm.

When asked why Basillote did not undergo a medical check-up right after his arrest, Quijano said suspects usually get checked before they are sent to the city jail to be detained.

“Unless, of course, if the detainee’s life is in danger, then he is sent to get medical treatment immediately,” he said in Cebuano.

Cebu City Police Director Royina Garma said she has not received a report on police brutality, but she encouraged those aggrieved to file a complaint.

“Naka-uniporme ba (Were the armed men in police uniform)? Madali naman ang mag-allege pero dapat may ebidensiya (It’s easy to make accusations, but there should be evidence),” she said.

SunStar Cebu showed Garma the video, but she refused to comment further.

Mayor Osmeña, in his Facebook post, said he will write to Garma to demand details of this “operation,” in the same manner he questioned the police harassment of his supporters in the mountain barangays.

“As with the previous letters, I do not expect a proper reply, but at least it will be on record that the police’s leadership is in contempt of the mayor’s authority as granted by Republic Acts 6975 and 8551 and charges will be filed,” Osmeña said.

“The people behind this will be held responsible,” the mayor said.

Meanwhile, Commission on Human Rights 7 Director Arvin Odron said they would start their investigation on the incident Friday, April 26.

Once they verify it, they will send a team to the Talamban Police Station together with a doctor, he said. (With JOB, JLL)