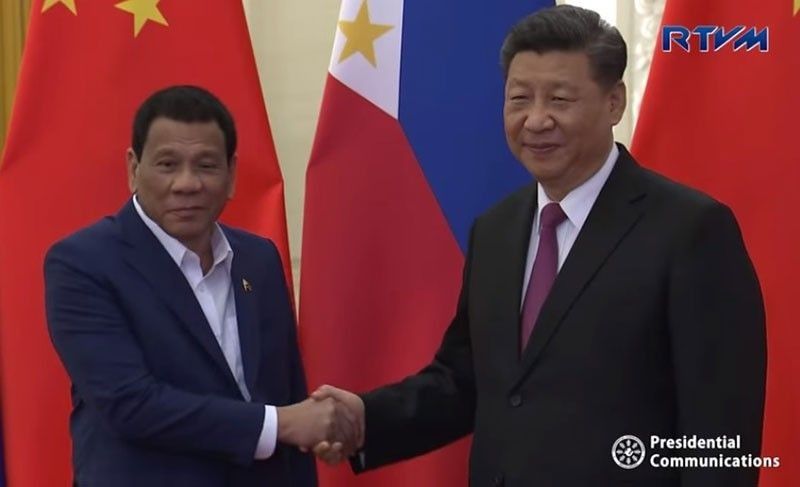 Presidential Spokesperson Salvador Panelo said Duterte raised the sea disputes, but tried to ease the tension over the issue, during his bilateral meeting with Xi in Beijing.

"In the course of the bilateral meeting, President Rodrigo Roa Duterte raised the issue of the West Philippine Sea, particularly the situation in Pag-Asa Island," Panelo, who joined Duterte in China for the second Belt and Road Forum, said in a statement issued Thursday night.

"Both agree that the situation can be managed by the mechanism of bilateral negotiations but it should not affect the cooperation being undertaken by both the Philippines and China and they look forward to a productive discussion on matters of mutual concern and interests," he added.

Panelo said Xi had stressed the importance of "good neighborliness and proper handling of differences between the countries."

He added that the Chinese leader even cited the memorandum of understanding on oil and gas inked between the Philippines and China, which "suspended their differences for a joint exploration that would mutually benefit both countries and their peoples."

"While the Chinese leader acknowledged the inevitable of having challenges to the bilateral relations, he placed importance on the mutual trust that exists between the two nations in order to resolve the same," the Palace official said.

Duterre, for his part, assured that Manila and Beijing remain allies, Panelo said.

"The Chief Executive culminated the talk with the Chinese President articulating his position that the Philippines remains China’s ally in Southeast Asia. The former emphasized that both countries are allies, and allies strengthen—and do not destroy – each other," he said.

Duterte's meeting with Xi occurred in the wake of the reported presence of Chinese maritime vessels in Philippine-occupied Pag-asa (Thitu) Island.

The meeting between the two leaders also came in the wake of the reported mass harvesting of giant clams by Chinese vessels in the Panatag (Scarborough) Shoal, a rich fishing ground off the coast of Zambales.

China has continued assert its claims over the disputed territory even after the Philippines won its petition lodged before the Hague-based Permanent Court of Arbitration.

On July 12, 2016, the arbitral tribunal ruled against China, invalidating its massive claims.

China has ignored the July 2016 decision of the Permanent Court of Arbitration and Duterte has refused to invoke it. (SunStar Philippines)