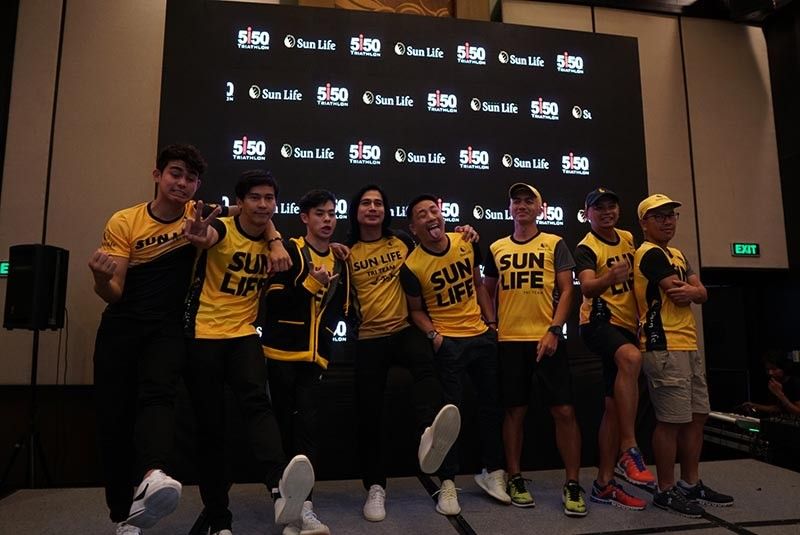 CROWD-DRAWER. Fans of actor and triathlete Piolo Pascual (center) will get a chance to see the actor up close in the Sun Life 5150 in the City of Naga this Sunday. (Contributed photo)

PROFESSIONAL triathletes and famous celebrities will bring added luster to the Sun Life 5150 Triathlon in the City of Naga, southern Cebu on Sunday, April 28.

“We are all set. The 5150 Triathlon gets people ready for the Ironman 70.3 race,” said Sunrise Events Inc. general manager Princess Galura in a press conference at the Seda Hotel on Friday, April 26.

Race director Neville Manaois said the bike course will have five loops around City of Naga and two loops for the run. The swim will have a rolling start.

“The bike course will be flat, fast and technical. For the run, it will be scenic and a hot course,” he described.

Road closures will be in effect in the City of Naga for the duration of the race. The sea side of the road will be closed while the other side will be open for motorists.

It’s the first time for Sun Life Financial Philippines to branch out as a major backer in a triathlon event. In the previous years, the company had been active participant in a series of triathlon events before the 5150 race.

“At Sun Life, we aim to provide Filipinos different avenues to enrich their health and wellness journey, whether they are already deep into their fitness goals or are just discovering their passion for it,” Sun Life chief marketing officer Mylene Lopa said. “Sun Life 5150 perfectly exemplifies that purpose, and this is why we are thrilled to be sponsoring this event.”

Galura said they want to hold the race for at least three years.

“The Province of Cebu wants to share the triathlon hosting to other areas in Cebu. The City of Naga is our choice for the first 5150 race in Cebu. The previous 5150 races were held in Bohol and Subic,” she said.

“At first we were hesitant to host this. It’s a challenge for us. We accepted it. With Sun Life and Sunrise working together, the race is now a go,” said City of Naga administrator Arthur Villamor. (RSC)