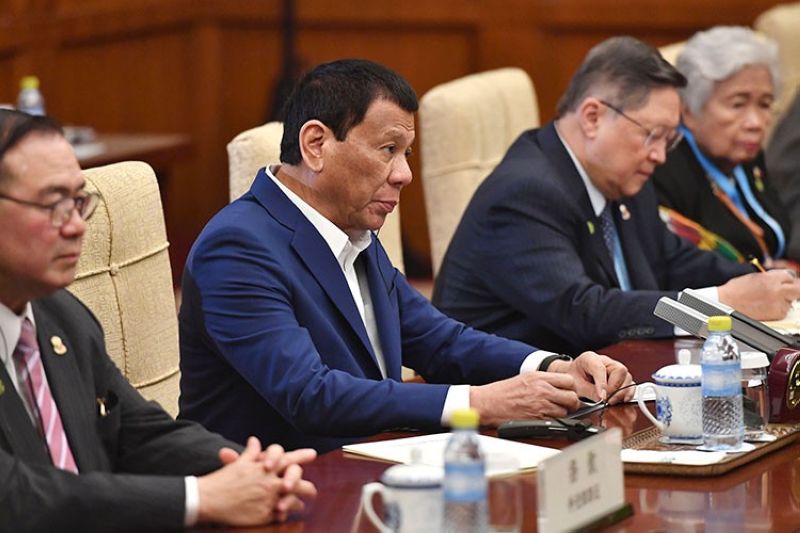 THE Philippines has secured at least $12.165 billion worth of investment and trade deals during President Rodrigo Duterte's visit to China, the Department of Trade and Industry (DTI) announced on Friday, April 26.

On the sidelines of the Second Belt and Road Forum in China, Duterte witnessed the signing of 19 business agreements between Beijing and Manila, Trade Secretary Ramon Lopez said in a statement.

The Trade chief said the business deals, meant to develop the fields of "energy, infrastructure, food, telecommunications, sale of agricultural products, tourism and economic zone, and industrial park development," are projected to generate 21,165 jobs for Filipinos.

In a keynote speech, Duterte said he was elated to witness the signing of the business agreements, which showed a "vote of confidence in the growth and prospects of the Philippine economy."

"I am pleased to be back in Beijing. Last year, [Chinese] President Xi Jinping and I agreed to elevate Philippine-China relations to a comprehensive, strategic cooperation," the President said.

"Strong linkages between Philippine and Chinese businesses are key to achieving this shared goal," he added.

The project, valued at $800 million, seeks to improve power supply reliability and resilience in the country, as well as to create 5,000 jobs.

The Davao Occidental local government and Fengyuan Holdings inked an MOU for a $1.5 billion petrochemical refinery processing plant complex that will be located at the Tubalan Cove Business and Industrial Park. The project is estimated to need 500 workers.

As part of the long-term plan to reduce dependence on imported energy fuels, the Department of Energy, Shanghai Electric Group Co Ltd., and Deluxe Family Co Ltd. signed a $-40 million MOU to collaborate in the promotion of the use of indigenous, new, and renewable energy resources.

Tranzen inked an MOU with China Harbour Engineering Company Ltd. for the construction of the Light Rail Transit in Manila, and housing and roads in North Luzon, which have a combined value of $4 billion and are expected to generate 1,000 jobs.

Tranzen also signed another MOU with CITIC Guoan Information Technology for a $500-million worth of project to construct infrastructure for nationwide Wi-Fi Internet connectivity in various capital cities and towns in the Philippines. The project will create 1,000 jobs.

The deal between Eng Seng Food Products and China Artex Corporation is expected to produce 1,500 jobs.

The Pampanga local government and Chinese firm Macrolink Group also signed a framework agreement worth $1.5 billion to construct and develop the Yatai Industrial Park. The project is estimated to create 10,000 jobs.

Another framework deal is inked between GFTG Property Holdings and Sanya CEDF Sino-Philippine Investment Corporation for a project that aims to develop Grande and Chiquita Islands under the Subic Bay Matropolitan Authority. The project is valued at $ 298 million and set to open roughly 1,000 jobs.

Aside from the 19 agreements, Lopez noted that AAC Technologies expressed intent to expand its current operations in the Philippines.

Lopez said AAC Technologies plans to invest $30 million to engage in stepper motor and motor reducer manufacturing. This is expected to create about 3,000 jobs in the next three years. (SunStar Philippines)