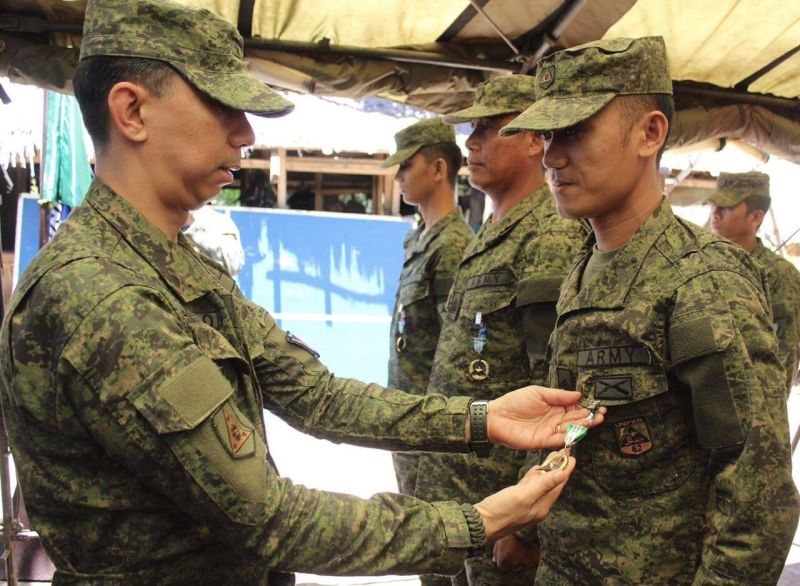 Brigadier General Benedict Arevalo, commander of 303rd Infantry Brigade of Philippine Army based in Murcia town, awarded military commendation medals to personnel of the 62nd Infantry Battalion (IB) and 79th IB in separate ceremonies at their respective battalion headquarters in Isabela and Sagay City on April 24, for their exemplary performance of duty in combat operations.

Arevalo also personally pinned a medal to Sergeant Edwin Gardose, who got injured in a clash in Calatrava town on April 17.

It can be recalled that military troops encountered suspected rebels twice last week.

The first armed clash happened in Bindoy town on April 14, wherein personnel of the 62nd IB discovered an enemy encampment at Barangay Cabcaban, and recovered 2 M16 rifles, an M4 rifle, subversive documents, and other personal belongings.

It was followed by another clash between the members of the 79th IB and suspected NPAs at Barangay Marcelo, Calatrava town. The clash resulted in the death of three suspected rebels and recovery of an M16 rifle, AK47 rifle, and several ammunition, and other war materials.

“As a commander, it is my duty to keep my men well motivated and to see to it that their hard-work, sacrifices and bravery in the battlefield is recognized,” Arevalo said.

On April 9, more than 70 soldiers and policemen also received the same commendation, in commemoration of the 77th Araw ng Kagitingan.

The troops already figured in a total of eight encounters against the NPAs since February this year.