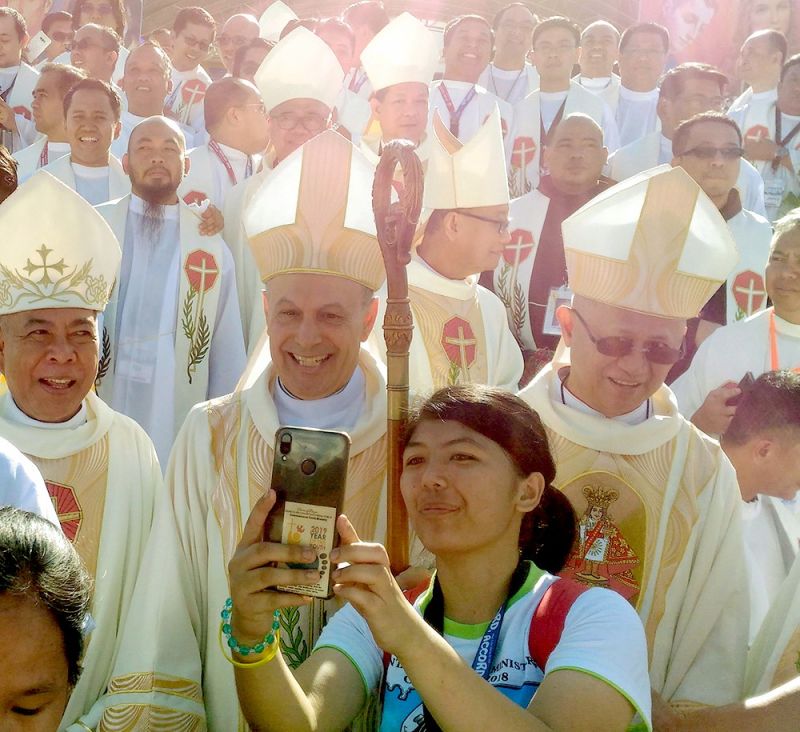 This was Catholic Bishops’ Conference of the Philippines president and Davao Archbishop Romulo Valles’ response when asked about the church’s stand on sexual abuses committed by some members of the clergy on minors.

“Dear bishops, it pains the young people and the people of the church are slowly losing their faith because this issue is being magnified in social media. What is our response to our fellow youth who have experienced hurt and abuse from the church?” asked a delegate from Jaro, Iloilo City during the Dialog with the Bishops portion of the National Youth Day (NYD) last Saturday, April 27.

Cebu Archbishop Jose Palma thanked the delegate for bravely raising the question in front of Papal Nuncio to the Philippines Gabriele Giordano Caccia, other Catholic bishops and 15,000 NYD delegates and volunteers.

He asked the crowd to applaud the delegate for his honesty before turning the question over to Valles who did not deny that such abuses happen.

“The church is very much ready and has done so, beginning with our Holy Father, to admit the situation and have said that we will continue to say that we are so so sorry and beg for forgiveness from the Lord,” Valles said.

Valles requested the faithful not to lose their faith and trust in the church, as church officials are doing everything to stop the abuses.

“There are procedures on what to do and bring justice to all. Wounded as we are, to move forward in humility, in justice, but always confident in the grace coming from the Lord. In this forgiveness is the power of healing,” he said.

Caccia, echoing Pope Francis’ reaction to the problem, stressed that the victim should be at the heart of this matter.

“It’s not easy. Imagine something bad happens in your family, do you cover up? Do you try to protect the good reputation of the family? Do you go exposing? Difficult choices, but we can always be sure that the stress should be on the suffering side,” he said.

Palma encouraged church abuse victims to open up to the people whom they think can help them.

“I have that experience. Someone opened up to me and I can only thank the Lord that God touched his heart because I thought the fact that he opened up with me, we journeyed together towards healing,” the prelate said.

The talk with the bishops ended by with an appeal from a delegate of the Archdiocese of Cagayan de Oro, who, using Pope Francis’ encyclical letter Laudato Si, pleaded to his fellow youth to be proactive in addressing the issue on pollution and climate change.

At the NYD’s closing ceremony held at the Cebu City Sports Center Sunday, April 28, the Papal Nuncio also urged the youth to “free themselves from cellphone addiction.”

Although he admitted that cellphones have become necessities in day to day life, he asked the youth to put aside the gadget for at least 10 minutes every day.

That way, he said, they can listen to their conscience and experience peace.

To achieve peace, one must start with silence, Caccia said. Silence will give birth to prayer and communion with God Almighty, he said. From prayer comes faith, he said, and from faith comes love. The desire to serve follows.

“Just like Jesus who loves His disciples, He served them, washed their feet. Jesus who loves us all, who died in the cross. Every love brings service, the capacity to say ‘No’ to ourselves but to say ‘Yes’ to others,” the Vatican official said.

Only then can the faithful achieve peace, he added.

Caccia also relayed Pope Francis’s message to the NYD delegates, assuring them that God lives within us all, especially the youth.

After thanking them, Caccia reminded the youth of the important role they play in today’s Roman Catholic Church.

Meanwhile, it was learned that Lilian Intrampas, the lone fatality in the fire that struck Sitio Silangan, Barangay Tejero last Friday, April 26, died because she tried to retrieve her cellphone inside her burning house.

The 66-year-old Intrampas had already gotten out after one of her children made sure she was safe when she turned back because she had forgotten her cellphone.

“Someone tried to stop her, but she insisted on going back. Maybe she tried to break the door at their CR (comfort room) because it was made of light materials since flames had blocked the front of her house. Maybe that’s why her body was found in the CR. She was trapped there,” said neighbor Yrayda Calicace in Cebuano.