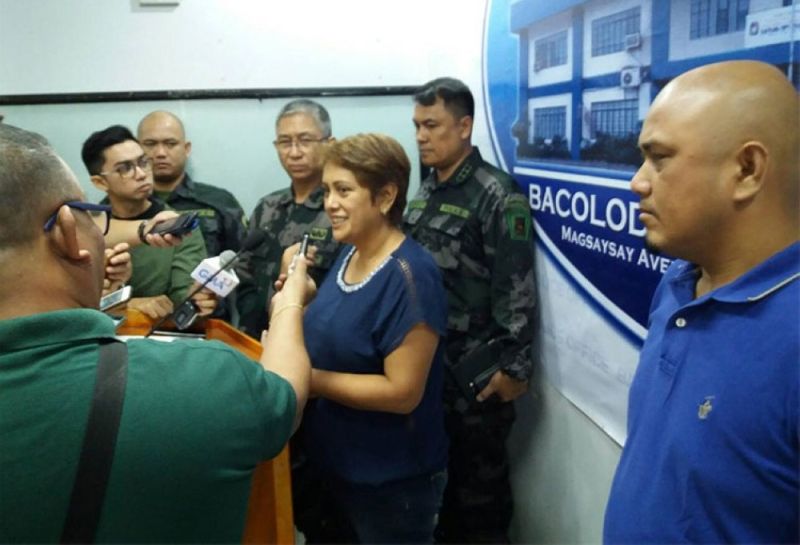 This was the reaction stressed by Moises Padilla Vice Mayor Ella Celestina Garcia-Yulo in Negros Occidental, when asked if she is satisfied with the investigation of the town policemen, following the death of her brother and nephew in an ambush at Barangay Inolingan on April 25.

Garcia-Yulo in a media interview on Saturday, April 27, at the Rolling Hills Memorial Park in Bacolod City, where her brother, Jose Marcelino Garcia was cremated, said she was not able to talk with the police about the incident.

On April 25, the vice mayor’s brother, along with nephew, Councilor Jose Antonio Garcia were attacked with not less than 20 unidentified armed men after coming from a campaign sortie.

Garcia-Yulo said she is asking the police officials in Negros and even in Western Visayas to relieve Police Major Junji Liba, town police chief, and other personnel of the municipal police station for lack of trust.

She said she wants the investigation to be directly handled by either the Negros Occidental Police Provincial Office (Nocppo) or the Police Regional Office (PRO)-Western Visayas.

For his part, Police Brigadier General John Bulalacao, director of PRO-Western Visayas in Iloilo City, in a phone interview with SunStar Bacolod Sunday, April 28, said Liba, and 24 police personnel will be relieved soon, following the recent killings in the town.

Bulalacao said he made such decision to put order in the town.

He, however, said he has yet to talk with the vice mayor since the incident happened because he knows that the Garcia family is still in shock about what happened.

“I intentionally did not talk to her that time,” he said.

Bulalacao said the existing town policemen will be transferred to another area far from Moises Padilla.

“I don’t know yet if they will stay in Negros or be moved in Panay area. It still depends on my assessment,” he added.

Bulalacao said policemen from Nocppo or from PRO-Western Visayas will replace them.

However, he has yet to reveal the effectivity of the order, as he is about to get clearance from the Commission on Elections (Comelec).

The town was earlier declared by the Comelec an area of immediate concern under red category, following the death of reelectionist Councilor Jolomar Hilario in an attack at the same village on March 31.

Meanwhile, Liba said the possible relief is just part of the normal procedure in the police organization.

He reiterated that the movement was to prevent them from taking more loads.

“Nobody wanted it to happen. We did our part to immediately respond to the call for assistance and to file criminal complaint against those persons behind the attack,” Liba said.

We do not want others to misinterpret that the relief is because we have lapses, when in fact, we did our jobs to solve the case, he added.

Liba said he will follow the order of the higher office.

On the other hand, the vice mayor said she has yet to send a communication to the Office of the President to seek help after what happened in the town.

Despite what happened, Garcia-Yulo said they will continue the campaign, to make a change in the town.

She is appealing to her constituents to never be afraid, to exercise their rights, and to vote for the right candidate to lead the town peacefully.

Additional police and military security were provided to the vice mayor after the ambush incident.

Meanwhile, the vice mayor did not comment on the decision of the Office of the Provincial Prosecutor to release Councilor Agustin “Nene” Grande III, Friday, April 26, after he was tagged behind the ambush when he was identified by the wife of the slain vice mayor’s brother, allegedly talking to one of the gunmen.

Grande, according to the police, denied the allegations against him.

Based on the resolution of the provincial prosecutor, “this office finds insufficient the legal and factual basis of the arresting police officers in effecting a warrantless arrest against him.”

“The allegation of witnesses that Grande was merely seen talking with an identified suspect with direct participation to the crime, inside the latter’s compound moments before the incident in question happened, is just a bare suspicion that cannot justify a warrantless arrest against him,” the resolution said.

However, a complaint for murder was filed against Joe Cezar, a member of the town’s Barangay Peacekeeping Action Team (BPAT).

He was linked to the killing after he allegedly admitted to the authorities that he provided shelter to the armed group who stayed in the village for a month and left the area when the attack happened, according to Police Colonel Romeo Baleros, Nocppo director.

His statement, however, was not attested by his legal counsel.

The prosecutor, based on a resolution, affirms the validity of the warrantless arrest against Cezar but he opted to avail of the conduct of a preliminary investigation. He was given 10 days to file his counter-affidavit.

Aside from them, five other persons who were identified behind the killing remain at large, and 23 men will also be facing the same complaint for the said crime.