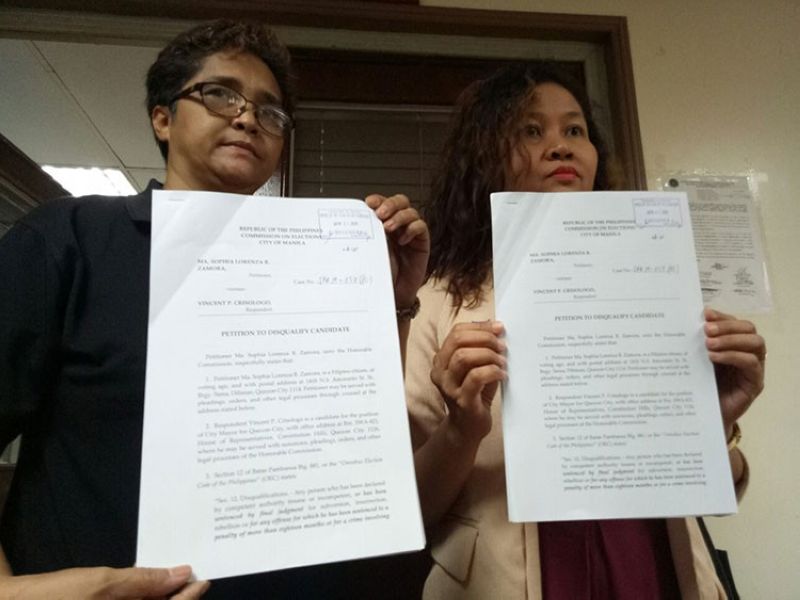 A DISQUALIFICATION case was filed at the Commission on Elections (Comelec) Monday, April 29, against Quezon City mayoral bet Vincent "Bingbong" Crisologo for lack of absolute pardon concerning his double life imprisonment sentence for arson and arson with homicide.

"If a person is convicted of a crime penalized by more than 18 months or a crime involving moral turpitude, such person is disqualified from being a candidate and to hold any office," the disqualification petition said.

The petition was filed by Sophia Lorenza Zamora, a concerned taxpayer and resident of Quezon City.

In 1970, Crisologo was convicted for one case of arson and a second case of arson with homicide for the burning of Barangay Ora Centro and Ora Este in Bantay, Ilocos Sur. He was then sentenced with double life imprisonment in a criminal court in La Union, for which Crisologo served time in jail.

In 1981, Crisologo received a conditional pardon from former President Ferdinand Marcos. He then allegedly received an absolute pardon on January 24, 1986, which later permitted him to run for senator under the Nacionalista Party in 1992.

However, in the disqualification petition filed Monday, April 29, documents from the Malacañang Records Office show that the executive clemency granted was only a conditional pardon dated January 14, 1981.

This is supported by a certification from the Board of Pardons and Parole stating that there are no other "official records or documents" in their custody, save for an index card showing that Crisologo was granted a Conditional Pardon.

"As such, respondent must be disqualified from running for City Mayor of Quezon City," it added.

According to the petitioner, the details of Crisologo's pardon were first questioned at the House of Representatives Electoral Tribunal (HRET) when Crisologo was elected as representative of Quezon City's First District in 2004.

On May 27, 2004, lawyer Moises Samson filed a petition for quo warranto against Crisologo after the latter was proclaimed as winner, citing the conditional pardon issued by former Marcos likewise did not restore Crisologo's right to hold public office. (PR)