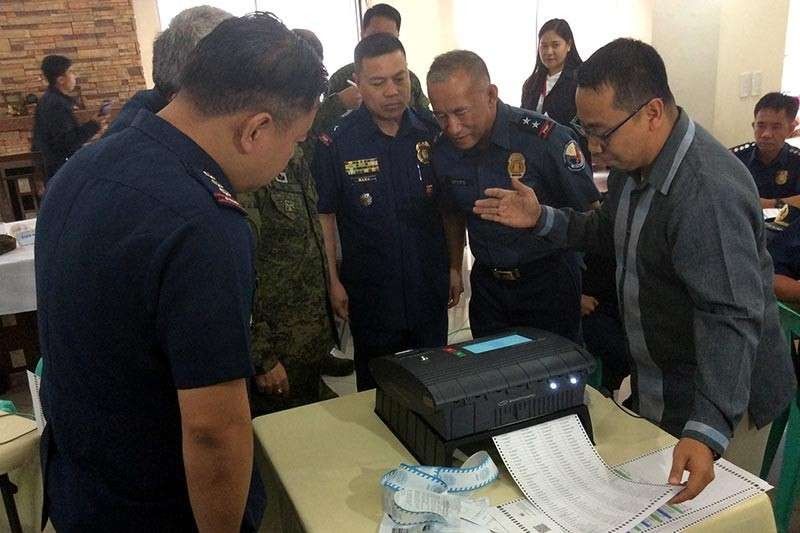 BAGUIO. In this photo taken in February 2019, Baguio City election supervisor John Paul Martin briefs then Police Regional Office Cordillera Director Rolando Nana and members of the Regional Joint Security Command Council on the safety measures of the enhanced vote counting machines to be used in the May 2019 midterm elections. (File Photo)

POLICE Regional Office Cordillera Director Israel Ephraim Dickson clarified on Monday, April 29, that he was not inspecting the vote counting machines (VCM) when he visited a warehouse in Baguio City on April 21.

In a statement, Dickson said he did not intend to inspect the hub per se but the police personnel who were deployed to secure the establishment.

“With regard to the purported inspection of VCM hub in Baguio City, this Office had no intention at all to inspect any VCM hub. The purpose of this Office in going to Baguio City was to personally oversee the actual deployment of personnel in relation with Election Security Preparations, Oplan Ligtas Sumvac, and Holy Week Alert; in which the influx of local and foreign tourists are expected to rise,” he stated.

“The activity is a regular Police function particularly that the Cordillera Region is on Full Alert Status due to the recent atrocities perpetrated by Communist Terrorist Groups in the region and in some areas in the Visayas and Mindanao,” he added.

Dickson issued the statement after a newspaper posted on social media a photo with the caption: “LOOK: Police Brigadier General Israel Dickson inspects the Vote Counting Machine and other election paraphernalia at the Comelec Warehouse in Baguio City. Comelec commissioner Rowena Guanzon said no one except Comelec officials are permitted to inspect VCMs."

Guanzon, in her own Twitter post, stated: “No one is allowed to inspect our warehouses without permission even if they are directors of PNP. Hey get out of there.”

No one is allowed to inspect our warehouses without permission ,even if they are directors of PNP. Hey ,get out of there. https://t.co/JlmKndspJY

Dickson said it was just a coincidence that during his inspection, the VCMs were being unloaded and no warehouse supervisor from the Commission on Election (Comelec), with whom he could have coordinated, was in sight. (SunStar Philippines)