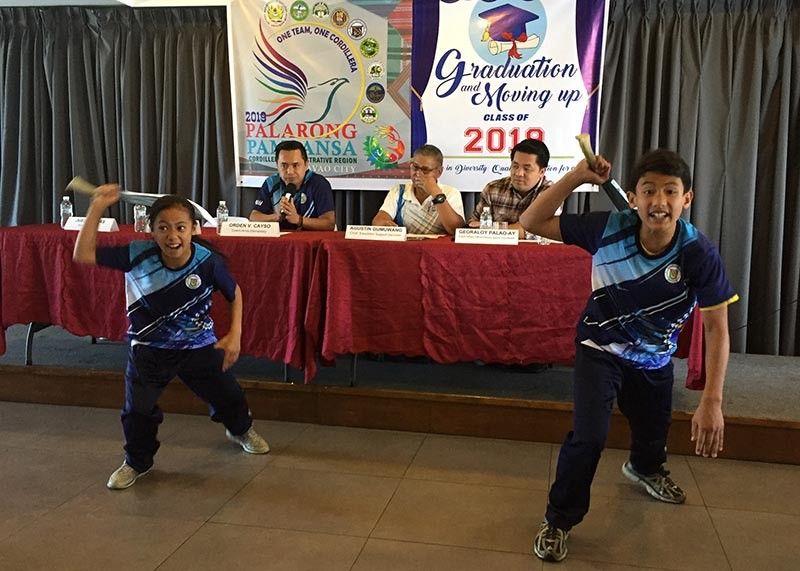 BAGUIO. Two arnis players seeing action in the Palarong Pambansa gives a demo during a recent press conference in Baguio City. Arnis gave the Cordillera region its first medal in the weeklong competition backed by the Department of Education. (Carlito Dar)

CORDILLERA pocketed its first medal in the Palarong Pambansa courtesy of arnis, but the taekwondo jins made their presence felt, bagging three gold medals.

The Fearless Higlanders are gunning for an improved finish and hopes to duplicate last year’s Palarong Pambansa medal output of 25 golds, 22 silvers and 23 bronze medals.

The region is also pinning its hopes on combative sports such as arnis, boxing, taekwondo, wushu, and wrestling.

During the opening program, President Rodrigo Duterte said he feels proud the city is hosting the Palarong Pambansa for the first time after 69 years.

"I'm proud that after so many years, my city has the honor to welcome promising athletes all over the country," Duterte said in a message to a crowd of around 20,000 during the opening of the 2019 Palarong Pambansa, the country's biggest sports event, April 28, at the Davao City University of the Philippines (UP) Sports Complex in Mintal, Davao City.

Duterte said sports is an important effective avenue to discover the potential of and inculcate discipline and sportsmanship to the young athletes both from private and public institutions.

He likewise warned drug personalities from influencing the youth and further reminded them of the adverse impact of illegal substance as his administration continues its fight against the proliferation of drugs.

Duterte assured that the National Government will continue to support the aspirations of the Department of Education (Deped) in developing the potential of the young Filipinos to be an active partner of the government in nation building.

"The only thing that this country needs is for you, youth, to assert your rights," he said.

Duterte, the event's guest of honor, welcomed all the delegates coming from 17 regions across the country while officially declaring the Palaro open. The President was joined by Education Secretary Leonor Magtolis-Briones during the opening.

Briones thanked the President for his support to her department. For the third consecutive year, Duterte has been attending the opening of Palarong Pambansa.

Durtete also congratulated the local government of Davao for hosting the national athletic game for the second time after 69 years. The first time the city hosted Palarong Pambansa was in 1950.

Around 14,000 athletes coming from 17 regions across the country composing of 690 delegates and 130 coaches per region graced the grand opening.

There are a total of 26 playing venues around Davao City, aiming to revive traditional games and giving opportunity to young athletes to interact with other athletes.

The crowd was estimated to reach 20,000 including athletes, visitors, coaches, and DepEd officials.

The opening ceremony was filled with colorful cultural presentations and local performances, while a skydiving performance was also held by the personnel from the Philippine Air Force. (With a report from SunStar Davao)