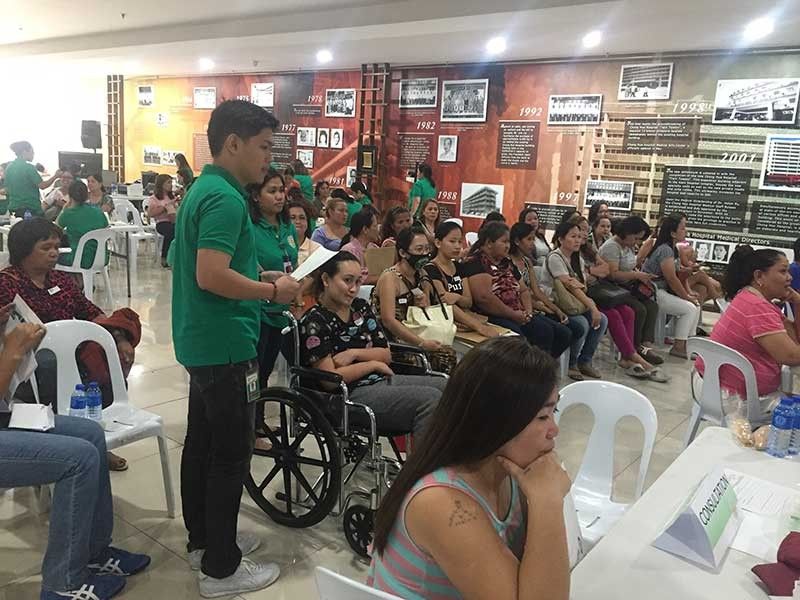 WOMEN’S HEALTH. Women seeking treatment for their condition wait for their turn during the second phase of Chong Hua Hosiptal’s surgical mission. At least 125 patients showed up for the free medical services on Monday. (SunStar Photo/Jerra Mae Librea)

ROBELYN Lecera of Barangay Uling, City of Naga has been suffering from pedunculated myoma for more than 10 years now.

She thought that it was just an ordinary lump until she was forced to have an ultrasound after having urinary tract infection (UTI). The ultrasound showed that she has myoma, or noncancerous growth in the uterus.

Lecera is one of the more than 100 patients with obstetrics and gynaecological-related health problems who benefited from the surgical charity mission of Chong Hua Hospital (CHH) in Cebu City on Monday, April 29.

She recalled that she first felt the small lump in her stomach when she was still 18 years old.

She ignored it thinking it was not serious. Besides, she could not afford to go to a doctor for a medical check-up.

Lecera was only able to see a doctor when her UTI complicated her myoma, resulting in extreme pain that made it nearly impossible for her to stand. She thought she would die that day.

“I was too afraid to see a doctor. I was afraid of finding out what my illness was,” said Lecera.

Now that she is 30 years old, she is often mistaken to be pregnant since the lump has grown in size.

Her myoma put not only her physical strength to the test but also her faith in God.

Lecera asked many times why she was given such an ailment when she has yet to achieve her only goal, which is to help her family.

Being the eldest, she wanted to support her mother and siblings after her father passed away, an emotional Lecera told SunStar Cebu.

Lecera inquired with some hospitals how much money she needs to undergo surgery.

She was discouraged when she learned she would need at least P100,000 for the operation. She prayed that help would come.

Lecera’s prayers were heard and she was chosen as one of the beneficiaries of CHH’s surgical mission.

She is scheduled to have a transvaginal ultrasound in three months.

Gary Galon, surgical charity mission chairman, said this is the main goal of their program, to reach out especially to Cebuanos who are less privileged, those who can’t afford to pay for surgery like Lecera.

“Our first priority are those who are in dire straits, those who do not have the means because that is the reason we are helping,” said Galon.

This surgical mission is also the hospital’s way to show its support for the government’s Universal Health Care program, which ensures that every Filipino gets to see a doctor at least once a year.

Since the second phase of the surgical mission for this year focused on women’s health, most of the patients yesterday came for the treatment of their myoma, cervical ailments and breast cysts, among other conditions.

On Monday, 125 pre-registered patients were able to talk to a doctor for consultation, birth canal examination, ultrasound and pap smear.

Based on the results, the doctors will then rank the severity of the condition of the patient to determine who needs urgent attention.

Some patients were already given a schedule for their next check-up while some were scheduled for surgery, said Galon.

A week before the operation, the patients need to have a check-up to be able to secure a medical clearance to know if they will survive the operation.

There were also walk-in patients who were accommodated.

Galon said the patient’s surgery is free, as well as the follow-up check-up after the operation.

Except for blood donation, CHH does not require anything else from the beneficiaries.

Galon hopes they will complete the procedures within three to six months so they can monitor properly the progress of the patients and they can be productive members of the community again.

This is the ninth year that CHH has been holding the surgical mission.