Women power on GOT Episode 3 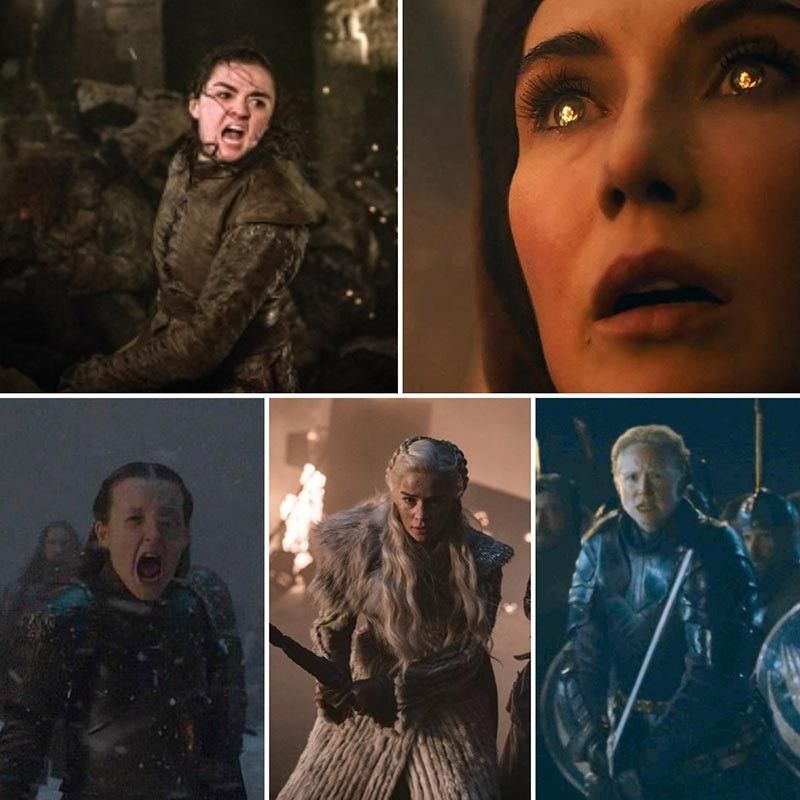 FOR the past seasons, the fight of Westeros had always been about who deserves to be on the Iron Throne. The war was always on whose House would have the most soldiers and the best war strategies.

However, we shift focus and priority as we travel to the 8th season of the series. We were told that no matter the House, no matter which family you came from, the war now is with the army of the undead -- with the Night King.

While the latest episode of Game of Thrones (GOT) was overwhelming for the fans, as it was filled with breathless suspense and action, it’s inevitable to notice how four great women contributed greatly to the success of the episode:

No doubt. By the end of the episode, there was an interview on writers D.B. Weiss and David Benioff who said that the development of Arya’s character throughout the entire series undoubtedly makes her perfect to kill the Night King, and in effect his whole army. The 80-minute episode takes us back and gives us a glimpse of little Arya who, at the start, was scared while running away from whatever is coming after her. But she gets back to her senses quickly and becomes the Arya that she really is.

Weiss and Benioff admitted that they had put scenes about other significant characters before the victorious slaying scene so the audience have so many characters in mind that they forget Arya actually left the room with a plan after Melisandre asked her “What do we say to the God of Death?” and she answered “Not today” exactly how she answered to her sword master several years ago.

The killing of the Night King was a perfect element of surprise.

A little girl much braver than the older men in Westeros. Even as early as when Jon Snow and Sansa Stark were still asking allegiance of House Mormont, Lyanna is character worthy to be praised and noticed. She has very strong leadership and firm decision-making abilities. She stands her ground and a very good fighter. With all her might, she shouted and went for the giant.

Everyone’s heart broke when the giant zombie picked her up and squished her little body but leaving Lyanna with enough strength to pierce his blue dead eyes with a dragon glass. The giant falls. A very David-Goliath scene if you’re religious. Weiss and Benoiff said they believed Lyanna deserved an honourable death.

With her beloved Dothraki killed one by one by the sea of dead people, her heart gave in. She didn’t want to stick with the plans. She rode Drogon and did what a Queen would do. A queen whose beloved army had been killed. She doesn’t waste any minute, perhaps blinded by her emotions and lack of back-up plans, yes, but her love for her army gave her the strength she would need to further protect her people and kill as much as the dead people that she and her dragons can kill.

By the end of the episode, we see a mother, a friend, and a queen who may have killed several of the enemies but whose heart bleeds for the loss of the life of her people.

Her presence in the series may be leaning towards deus ex machina and that’s not a very good trait of the episode. She appears just before the war starts (where did she come from?) and disappears just as she promised when the sun was rising.

Her deep faith to the Lord of Light provided them fire for the Dothrakis’ swords and the trenches when the flying dragons could not see them down. Although questionable, her presence showed how a war with non-humans would need help from the gods as well. She was seen distracted and anxious when the trenches wouldn’t despite repeating the prayer. But she persisted. She was faithful.

Perhaps the Game of Thrones is a hit, not only because of the dragons, beheadings, the castles, or the sex scene. The fans loved to see how their beloved characters have evolved to be a strong figure through the test of time.