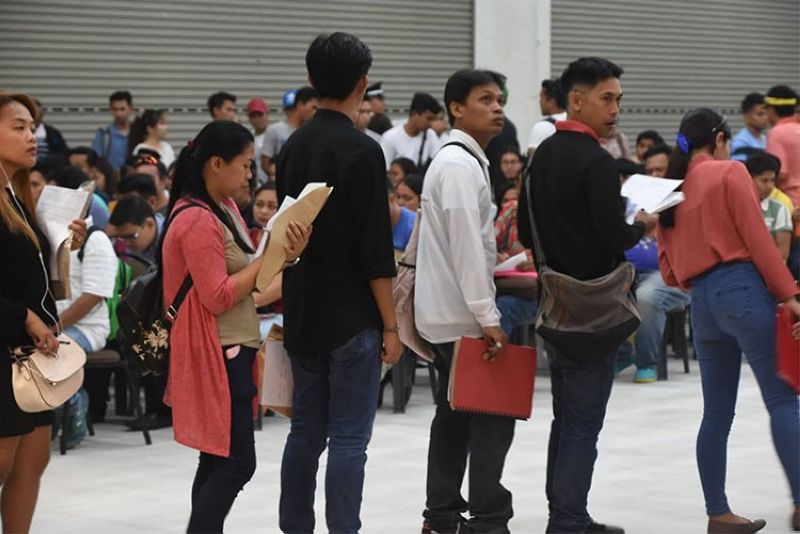 CEBU. Jobseekers lining up, waiting for their turn to be interviewed during the Labor Day job fair in SM City Cebu. (Allan Cuizon)

TWO senior high graduates from Lapu-Lapu City were among the 1,714 jobseekers in Central Visayas who hoped to find a job during the jobs and livelihood fair hosted by the Department of Labor and Employment (Dole) on Wednesday, May 1.

The job fair is in line with the country’s 117th celebration of Labor Day.

Michelle Pacquiao and Angelica Ligama, both 20, were graduates from the Humanities and Social Sciences (HUMSS) strand and were planning to take a degree in education when they got to college.

Friends since high school, both were hoping to get a job and get accepted as sales clerks.

Though they are planning to pursue college, Pacquiao and Ligama still want to work to get an income to help their families.

They said the skills they have are enough for them to compete in the workforce.

Danilo Trazo, another jobseeker, hoped to get a new job abroad. He is currently an assistant manager in one of the companies in one of the export processing zones in Cebu.

The growing needs of his family are what push Trazo to go abroad and get a higher paying job compared to his current work. “I’ll take any job, so long as it’s overseas, in Japan, I hope,” said Trazo.

Aside from the financial issue he is facing, Trazo wants to go abroad to practice the degree he finished when he was in college. He finished computer engineering.

“It’s difficult to find that type of work here. I’d like to practice it abroad,” said Trazo.

Dole 7 Regional Director Salome Siaton said there were at least 18,000 available jobs, both local and overseas, offered during the Labor Day celebration.

Siaton highlighted the increase in the employment rate in the region from last year’s 92.2 percent to 94.8 percent in the first quarter of 2019.

She cited the government’s Build Build Build program that contributed to the increase in employment rate.

In the four simultaneous job fairs in Central Visayas on Wednesday, 1,714 job applicants registered and 1,159 were qualified.

Most of the participating industries were from the manufacturing industry, malls and health.

Meanwhile, 26,000 contractual workers in the region were regularized last year, Siaton said. These were mostly in Cebu.

Siaton urged more employers to regularize their employees this year or face sanctions.

Meanwhile, rival labor groups held what was supposed to be a unity rally that did not happen after a downpour Wednesday.

ALU spokesperson and executive assistant director Art Barrit said the plan was AMA-Sugbo-KMU would join the ALU-Trade Union Congress of the Philippines in marching on Colon Street.

Both groups call for a nationwide minimum wage of P750 and the end of contractualization. (JJL with EOB, VLA)