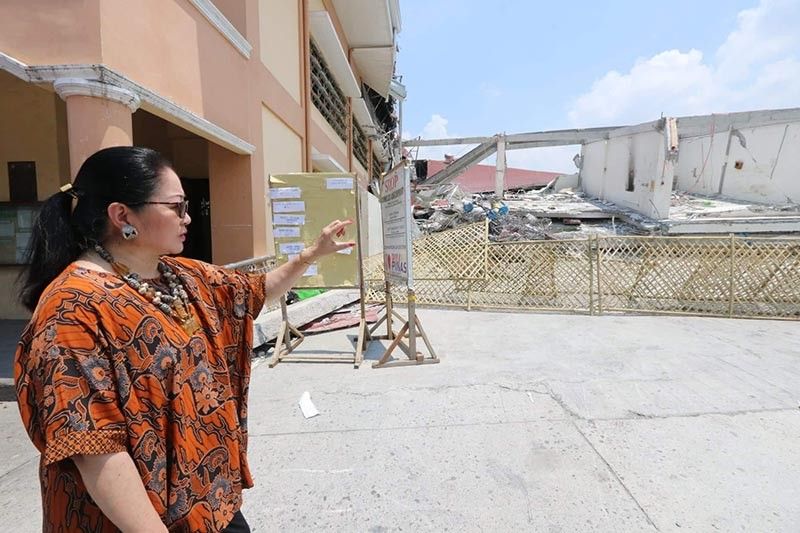 PAMPANGA. Former senator Nikki Coseteng hinted that steel bars used in the construction of Chuzon Supermarket in Porac town may be of "poor quality." (Chris Navarro)

FORMER senator Nikki Coseteng reiterated her call for authorities to probe the manufacture of steel bars, following the collapse of the Chuzon Supermarket in Porac, Pampanga after a magnitude 6.1 earthquake hit Luzon last April 22.

“Steel bars manufactured in the country are not reliable,” Coseteng told reporters during her visit at the ground zero on May 2.

“What if there is a stronger earthquake and it hits Metro Manila where there are higher buildings?” she added.

She assailed prominent steel manufacturers for failing to prove that their products could withstand a strong earthquake such as the “Big One,” a 7.2-magnitude earthquake that could hit Metro Manila and nearby areas.

She said the Bureau of Products Standards of the Department of Trade and Industry (BPS-DTI) must also be questioned for the proliferation of sub-standard materials in the market.

According to Coseteng, steel manufacturers should not be focused on profit, but instead on the safety and lives of the people.

The Chuzon collapse, Coseteng said, has indications of clear violations of the National Structure Code of the Philippines. The irregularities and practices of steel manufacturers can be seen in their sizes, which is a deception to the public, she added.

Coseteng visited Porac Mayor Condralito Dela Cruz to express her condolences to those who died during the earthquake.