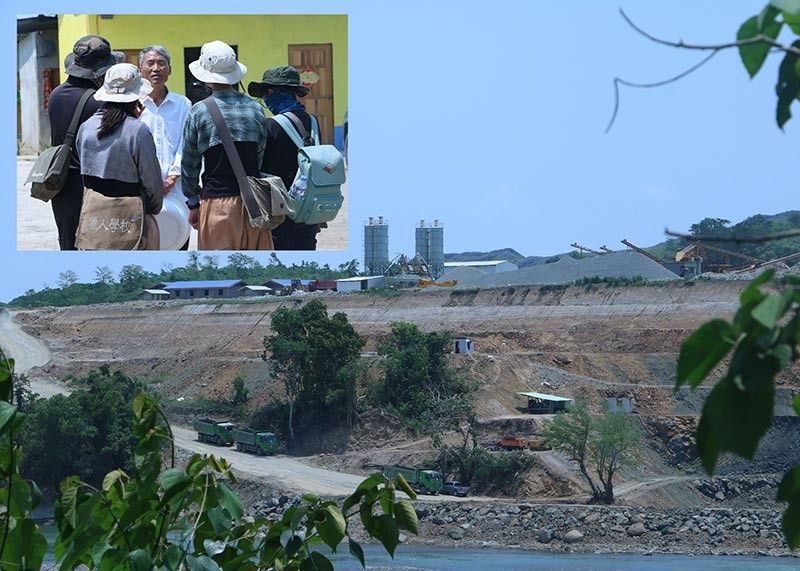 BAGUIO. Construction in the Chico River goes full swing with some Chinese workers (inset) spotted in the area. (Contributed photo)

A HOARD of Chinese workers are now in Tabuk City, Kalinga.

Windel Bolinget of the Cordillera Peoples Alliance (CPA) said influx of Chinese workers is being observed in the ongoing Chico River irrigation project.

Bolinget reported various checkpoints are set up going to Pinukpuk town where bunk styled homes are set-up with about 60 rooms filled with local and Chinese workers.

CPA informants attest Chinese workers outnumber the locals and are suspected to have a lack of working permits as they are set to exit in a few months, the same length as the expiry of tourist visas.

Reports reaching the CPA reveal tunneling work has started for the project as well as leveling of land and earth moving activity which is affecting the mountains.

Bolinget said the destruction of the Chico River is starting with danger of siltation and mountain scrapping ongoing compromising overall stability in the area.

Previously, the Makabayan Bloc asked the Supreme Court to stop the Chico River irrigation project questioning the constitutionality of the loan agreement between the Philippines and China in the hopes to get a temporary restraining order [TRO].

Speculation over the Chico River Project slams the constitutionality of making patrimonial assets as collateral were raised as well as agreements on automatic appropriation as the deal takes away the power of the purse from the congress.

The 20-year loan deal for the Chico River Pump Irrigation Project was signed by Ambassador Extraordinary and Plenipotenciary of China Zhao Jianhua and Finance Secretary Carlos Dominguez 3rd on April 2018.

The project seeks to create canals diverting the water from the Chico River into different areas in Tuao and Piat Cagayan and Pinukpuk in Kalinga. According to the Department of Finance, the interest rate on the US Dollar denominated loan is two percent per annum with a maturity period of 20 years including a seven-year grace period.