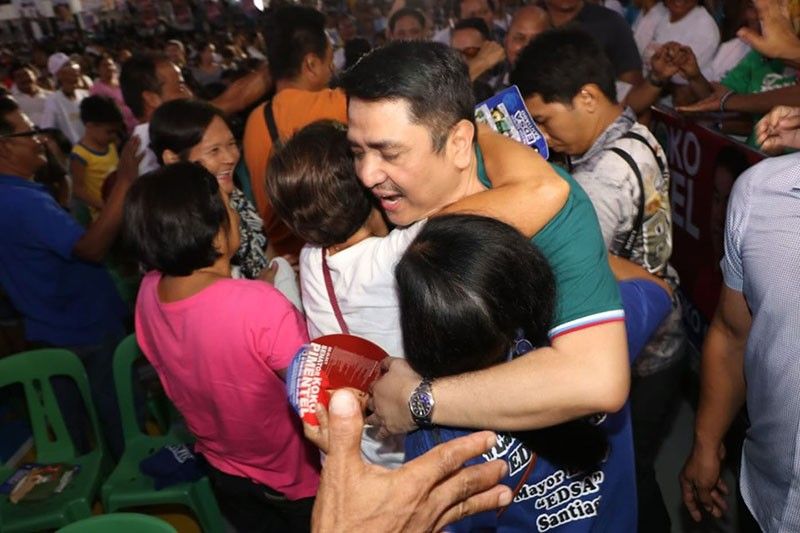 PAMPANGA. Congressman Aurelio “Dong” Gonzales Jr. (3rd District of Pampanga) gets a kiss and hug from one of thousands of supporters during Friday’s PDP Laban National Campaign sortie / caucus held at the BZG Convention Center, CSFP. The event was attended by senatorial candidates of PDP Laban. (Chris Navarro)

Former special assistant to the President Christopher “Bong” Go, who is running for the Senate in the May 13 elections, said the passing of the bill creating a Department of Disaster Resilience (DRR) would greatly improve the disaster preparedness and response of areas in the country including Pampanga.

Lawmakers voted 181-5-2 to approve House Bill (HB) No. 8165 on 3rd and final reading in October last year. Go said he will follow through with the said department and encourage congressional oversight to ensure that the DRR goes through well.

Senator JV Ejercito during the PDP-Laban, meanwhile, highlighted the need for preparation and overall development of and capacity buildup of respective provinces and towns.

PDP-Laban bets were all over Central Luzon last week.

Central Luzon boasts of some 6.8 million registered voters with some 1.46 million voters in Pampanga alone.

Former president and House Speaker Gloria Macapagal Arroyo and Gonzales both appealed to hundreds in attendance at the Bren Z. Guiao Convention Center to help deliver an enormous victory for PDP-Laban.

“PDP-Laban has been very generous to Pampanga,” Arroyo said.

“We brought PDP-Laban and some of their guest candidates here. You know their qualifications, their background, how they helped us,” Arroyo told hundreds in attendance.