Seares: Labella has all the reasons not to debate; only one why he must

THE DEBATE won’t serve its purpose if challenger Cebu City Vice Mayor Edgar Labella wants the face-off to persuade reelectionist Mayor Tomas Osmena to change his policies and methods of governance. Or vice versa. Guillermo Jimenez’s theory says debates are futile because they are based on the mere premise that we can convince our enemies by the logic of our arguments to change their minds. That won’t happen, he says.

If Edgar has the voters in mind and not Tomas, most voters at this time have already decided on their choice. Even the few who are undecided may take their pick for other reasons, not as to who won or lost. And most voters don’t weigh pro and con in deciding whom to vote for: Influence or pressure from the boss, the landlord, the factory manager, the sitio or barangay leader, or returning favors from politicians, including cash for vote, counts more than a logical tally of merit of the competing aspirants.

Reset from April 24 to May 6, the Cebu City-IBP-organized Osmeña-Labella debate may be rescheduled again, maybe to May 10 or two days before election day. Labella says he has an important meeting in Manila on May 6 but will agree to a May 10 date.

If it will happen, it is a no-decision debate. Yet the protagonist who outscores the other on some issues will be the perceived winner, which his propaganda machine can trumpet in the few days left for the campaign.

Labella cannot be sure of delivering the k.o. punch or punches. While he is a litigation lawyer and a former prosecutor and councilor and Osmeña is an agriculture graduate, Edgar is not known for glibness or harshness of tongue and Tomas is.

It is not for lack of training or experience in debate, Edgar must have lots of that. His deficit, and Tomas’s excess, is braggadocio, which comes from hubris, along with insensitivity to the pain that one’s sharp words inflict on the other. Edgar is meek, to the point of being a wimp, as one newspaper columnist suggested. That may not be the image of the mayor whom Cebu City residents want. On the other hand, if Labella would transform himself and assume the character of Osmeña, he might turn off his growing mass base that hates Tomas’ “arrogance” which President Duterte slammed.

To Labella, it must be the old problem of weighing benefit against cost.

What would Edgar gain from a debate seven days or two days before election day, from which any devastating result one couldn’t recover from or any surge of votes could be illusory? And how would he assess that in Tomas’ situation?

They say Labella in a debate could show that (1) Osmeña, after decades of rule, still hadn’t solved the city’s major problems such as traffic, peace and order and water and other basic services and (2) the benefits from his much-touted SRP and BRT projects are still to come and be felt by city residents.

But the format of the debate deals mostly with plans and programs, which both sides have already explained more intensively and directly with various groups of voters since the COC filing. It is a design that won’t allow thorough probing on Osmeña’s alleged failure to tackle the city’s most serious ills. And on the opposite side of the scale, Labella risks being out-talked or out-witted on issues where he needs to be tough or mean.

The problems of the city cannot be solved by the better debater or the more logical argument raised on the public stage.

Voters may have realized by this time that personality and style, along with vision and dynamism of the would-be leader, could be the game changer. Water and traffic, which worsened in the last few weeks on the road to election day, must have jolted many voters to think, even without watching any debate.

Labella has all the reasons not to debate. And the prospect of being called “chicken” by Osmeña--the single reason why he must debate-–cannot be worse than the probability of being out-performed on the stage and outvoted on election day.

It’s solely Edgar’s call and he must anticipate for the fallout, whether on his campaign or his adversary’s, should he decide to keep his word even if most other politicians do not. 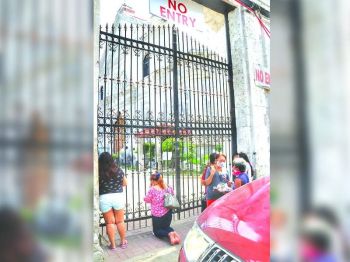