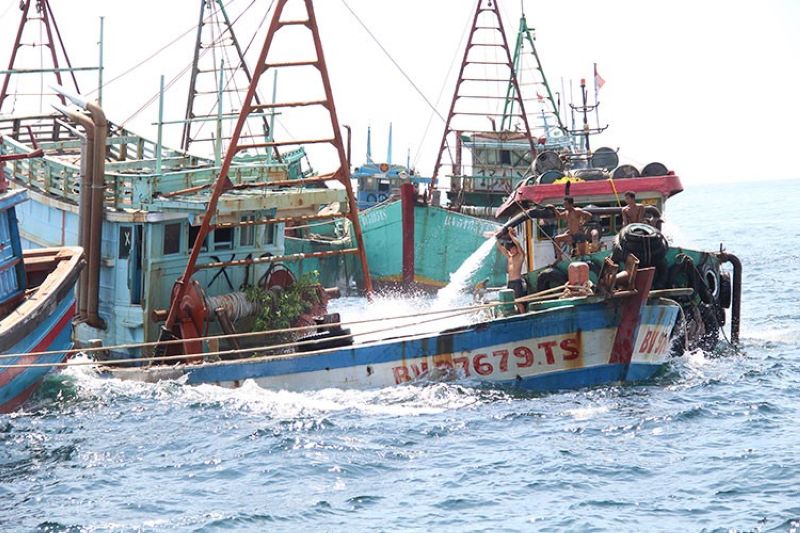 INDONESIA. Workers flood the cargo bay of a Vietnamese-flagged boats with water to sink it in the waters off Datuk Island, West Kalimantan, Indonesia, Saturday, May 4, 2019. (AP)

JAKARTA, Indonesia -- Indonesian authorities resumed their tough stance against illegal fishing in the country's waters by sinking 51 foreign ships Saturday, as the government ramps up efforts to exert greater control over its vast maritime territory.

The seized ships were sunk at five ports across the archipelago, which has some of the world's richest fishing grounds, the Maritime and Fisheries Ministry said in a statement.

Fisheries Minister Susi Pudjiastuti said in a speech that the illegal boats were a threat to the local fishing industry. Their operators are frequently perpetrators of modern day slavery.

"This crime of illegal fishing in our waters was out of mind," Pudjiastuti said. "We can't tolerate anymore."

Saturday's events were carried out in a low-key fashion compared with previous occasions, when boats were blown to pieces and their destruction broadcast live.

A video taken off Datuk island in West Kalimantan province and released by the ministry showed Pudjiastuti and other fishery officers scrambling to an adjacent boat from a sinking vessel that had been filled with sand and flooded. She clapped her hands when she saw several ships successfully sunk.

The move came a week after an Indonesian navy patrol ship was rammed by two Vietnamese coast guard ships after intercepting a boat it says was fishing illegally in its waters. The Vietnamese claimed that the area was Vietnamese waters.

Indonesia detained 12 Vietnamese fishermen from the boat, which sank in last Saturday's clash, and they are being held at a naval base on Natuna island.

Indonesian government said it has sunk more than 500 illegal fishing vessels since October 2014, many with explosives.

Indonesia, an archipelago of more than 17,000 islands, claims a huge exclusive economic zone, which is frequently penetrated by foreign fishing vessels. Its northerly reaches are regarded by China as its traditional fishing grounds despite their distance from the Chinese mainland. (AP)