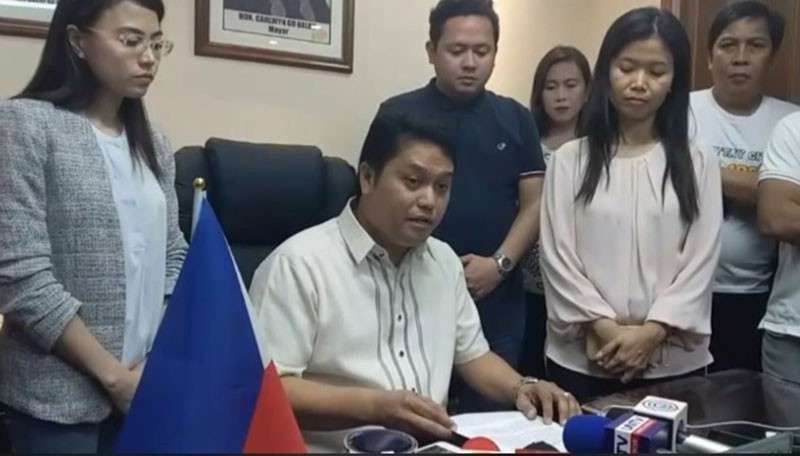 MANILA. In this file photo, Daraga Mayor Carlwyn Baldo reads a prepared statement claiming innocence hours after he was accused of being the mastermind behind the killing of Ako Bicol Party-list Representative Rodel Batocabe. (Photo from Awin Baldo Facebook page)

A LEGAZPI City court has ordered the arrest of Daraga Mayor Carlwyn Baldo over his alleged involvement in the killing of AKO-Bicol party-list representative Rodel Batocabe and his aide in December 2018, Bicol Police Regional Office Director Arnel Escobal said on Monday, May 6.

Escobal said the arrest warrant against Baldo was issued by Judge Maria Theresa San Juan Loquillano of the Legazpi Regional Trial Court Branch 10 on Friday, May 3.

He said they have yet to establish Baldo’s whereabouts but the police are already coordinating with the family to pave for his surrender.

Baldo was identified as the alleged mastermind in the killing of Batocabe on December 22 while conducting a gift-giving activity in Daraga in Albay.

Six suspects identified as Christopher Naval, Henry Yuson, Jaywin Babor, Emmanuel Rosello, Daniel Muella and Rolando Arimado all surrendered to the police and admitted having a hand in the crime.

They said Baldo ordered the killing of Batocabe. The congressman was challenging Baldo's reelection bid when he was gunned down.

On January 22, Baldo was arrested for alleged illegal possession of firearms following the conduct of a raid at his residence. He was, however, allowed to post bail.

Daraga has been placed under Commission on Elections (Comelec) control following the Batocabe killing. (SunStar Philippines)