Discern your choices on May 13, inter-faith leaders ask voters 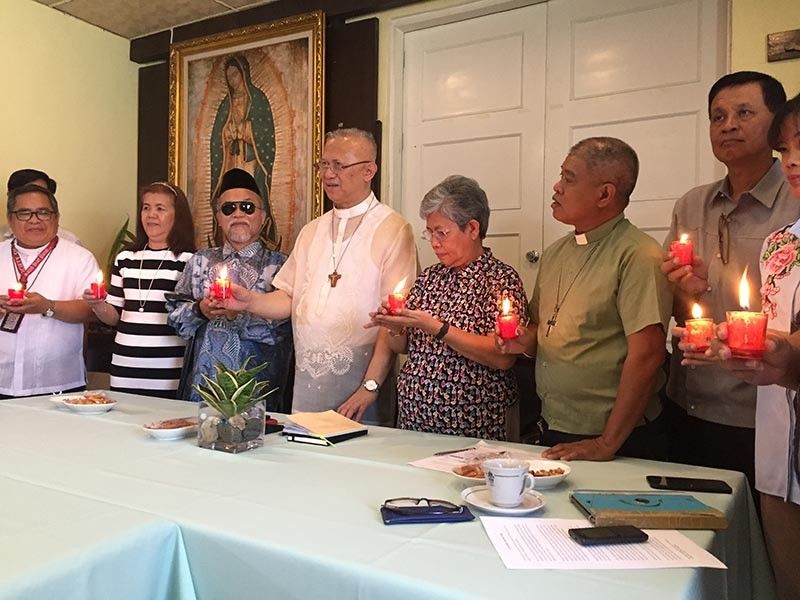 ONE IN PRAYER. Ustadz Najeeb Razul, a Mufti, and Cebu Archbishop Jose Palma (third and fourth from left) join leaders of other faiths in praying for peaceful elections. (SunStar photo / Jerra Mae Librea)

A MUSLIM religious expert called for unity and brotherhood among all voters, regardless of religion, during an inter-faith service at the Cebu archbishop’s residence on Monday, May 6.

Ustadz Najeeb Razul, a Mufti or an Islam religious expert, said Filipino voters must work together toward goodness, specifically in choosing leaders who would be good for the country.

“So our prayer for this coming election is that Muslims come together with non-Muslims. Let us all be united,” he said.

Cebu Archbishop Jose Palma shared Razul’s sentiment and appealed to the people to be serious and discern properly their choices when they vote on May 13.

Palma advised the people to be meticulous when choosing the country’s leaders, and not vote out of a debt of gratitude.

“Whatever comes out of this (election) will reflect the choice of the people,” said Palma.

Meanwhile, with the start of the Ramadan, Razul asked his Muslim brothers to pray for peace and unity.

He said that in order to attain peace, people need to respect and recognize each other.

“Whether we like it or not, we are all brothers. Regardless of our faith, whether we are Christians, Muslims or Jews, we are all created by one Almighty God,” he said.

Razul hoped that in the spirit of Ramadan, his Muslim brothers would help bring change to the community and foster unity among the people.

On the issue of extra-judicial killings, Razul also called on the Filipinos to uphold their values and respect human life so the killings would end.

“Respect and love should be always there so the world will be a better place to live in,” said Razul. (JJL)