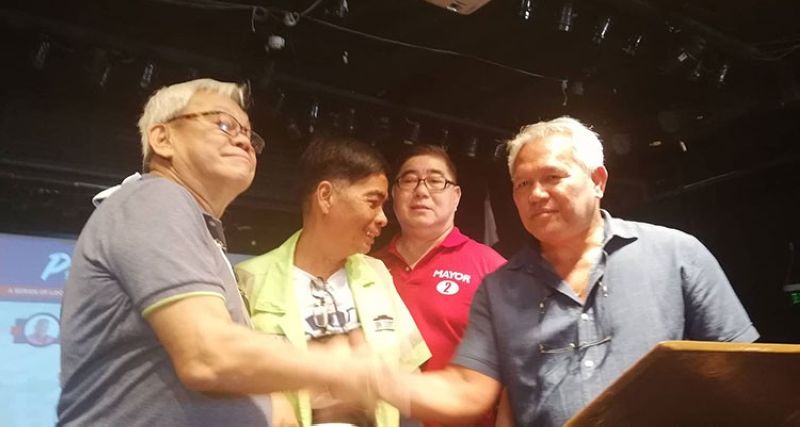 In the survey, conducted among 1,000 (sample size) registered voters in Cagayan de Oro City from April 27 to May 1, Moreno has a voter preference of 60.3 percent and remains in the topmost statistical ranking.

Behind in second place is Pompee La Viña of Padayon Pilipino with a voter preference of 21.3 percent. Independent contenders Felix Frias Borres stand at 0.6 percent, while Ben Tiu Contreras at 0.0 percent.

Undecided voters accounted for 17.3 percent, while 0.5 percent had no response.

The margin of error is at ±3.0 percentage points with 95 percent confidence level.

Moreno remains the favored candidate in both districts of Cagayan de Oro with 59.8 percent of voter preference in District 1 and 60.7 percent in District 2.

La Viña got the second highest share of voter preference in District 1 with 18.4 percent and 23.9 percent in District 2.

Comparing the two Kuro surveys, Moreno garnered 61.5 percent in the overall share of the voters’ preference in the first survey while in the second one, he got 60.3 percent, a difference of 1.2 percentage points.

Borres and Tiu got less than one percent support of the registered voters each in both surveys. The number of undecided voters dropped from 21.4 percent to 17.3 percent as the election day approaches.

Uy got 55.0 percent of the voters’ preference in the first poll and 59.3 percent n the second one, up with 4.3 percentage points.

Meanwhile, Emano rose from 23.6 percent to 24.8 percent in the latest survey. As in the mayoral race, the undecided voters for the vice-mayoral contest also decreased from 21.3 percent to 15.2 percent.

From District 1, PDP-Laban candidates stand out in the race for the eight (per district) of the 16 seats in the City Council. Of the 10 contenders with a statistical chance of winning, eight are from the ruling party and one each from Padayon Pilipino and Partido Federal ng Pilipinas (PFP).

The first set of candidates ranked 1 to 5 are statistically tied, indicating that no one has a significant lead over the others and that any of the five can be in the 1st, 2nd, 3rd, 4th, or 5th rank.

The margin of error is at ± 4.5 percentage points with 95 percent confidence level.

The second set of candidates ranked 6 to 10 are statistically tied, showing that no one has a significant lead over the others in the group and that any of them can be in the 6th to 10th position. The margin of error is at ± 4.3 percentage points with 95 percent confidence level.

The latest KURO survey results also show that Padayon Pilipino’s Jose Pepe Jr, Ronald Acanas, and Alden Bacal who used to be part of the rank 8-13 group in the first survey are now Out of a Possible Top 8 Finish (OPTF).

Voters in the District 2 also prefer PDP-Laban bets in the City Council.

Of the 14 candidates with a statistical chance of winning, eight are running under PDP-Laban, four are from Padayon Pilipino, and two are from Centrist Democratic Party (CDP).

In rank 1-7 are (in alphabetical order based on surname) Girlie Balaba (PDP-Laban), Edgar Cabanlas (PDP-Laban), Suzette Daba (PDP-Laban), Malou Gaane (PDP-Laban), Bong Lao (PDP-Laban), Ian Mark Nacaya (PDP-Laban), and Eric Salcedo (PDP-Laban). This set of candidates ranked 1 to 7 are statistically tied, indicating that no one has a significant lead over the others and that any of the seven can be in the 1st, 2nd, 3rd, 4th, 5th, 6th, or 7th rank. The margin of error is at ± 4.2 percentage points with 95 percent confidence level.

The latest Kuro survey results also reveal that the rank of Acenas and Tabor changed from rank 1-7 to rank 8-14, while Balaba and Daba (Suzette) who used to be part of rank 8-13 in the first survey are now up in rank 1-7. Melliza who was OPTF in the first survey now has a spot in rank 8-14 in the second survey.

A total of 49 candidates (26 from the First District and 23 from the Second District) are gunning for 16 coveted spots in the City Council.

Who will be CDO's congressional representatives?

In District 1, incumbent Rolando Uy (PDP-Laban) still dominates the congressional race with a voter preference of 65.8 percent, followed by Caesar Ian Acenas (Padayon Pilipino) with 15.4 percent and Gil Banaag (PFP) with 2.7 percent. Undecided voters were at 15.0 percent. The margin of error is at ± 4.3 percentage points with 95 percent confidence level.

Banaag went from 1.9 percent of voters’ preference to 2.7 percent.

Statistically, there is no significant change in the differences between the results of first and second surveys as regards the three candidates.

In District 2, Rufus Rodriguez (CDP) has the support of 57.3 percent of the registered voters. Trailing behind Rodriguez are Alam Lim (PDP-Laban) with 33.0 percent and Roger Villazorda (PFP) with 0.8 percent. Only 8.7 percent of the voters remain undecided, while 0.2 percent has no response as to their preference for a congressman. The margin of error is at ± 4.2 percentage points with 95 percent confidence level.

Between the first and second polls, Rodriguez and Villazorda had no statistically significant change in their results. However, as the number of undecided voters dropped from 15.9 percent to 8.7 percent, preferences for Lim increased significantly from 19.4 percent to 33.0 percent.

Where do Kagay-anons get their info about the candidates?

Whereas in the previous Kuro survey, the major barangay-level issues in Cagayan de Oro City were identified, this time, the respondents of the second survey answered the question: What helped them most to know more the candidates?

Each respondent could have responded with multiple answers from the eight choices provided.

The latest XU-Kuro survey, conducted on April 27 to May 1, used a systematic random sampling in the selection of households. The sample size of 1,000 was allocated proportionately to Districts 1 and 2.

As in all past poll surveys by Kuro, this research was fully funded by Xavier University-Ateneo de Cagayan.

In an April 1 memo to the academic community, Xavier Ateneo president Fr. Roberto C. Yap, SJ, iterated: “[The university] participates in a non-partisan way in electoral processes to contribute to the strengthening of democratic and patriotic values as enshrined in the Philippine Constitution.”

Xavier Ateneo aligns with the advocacy for Clean, Honest, Accurate, Meaningful, and Peaceful (Champ) elections, and enjoins everyone in the community to practice the Ignatian value of discernment in choosing candidates running for elective posts in government.

“Xavier Ateneo will maintain its non-partisan stand to facilitate objective and critical thinking and engagement for the academic community,” Yap said. “We will actively support electoral programs and activities primarily as convener of the multisectoral Lihuk 2019 movement.” (PR)