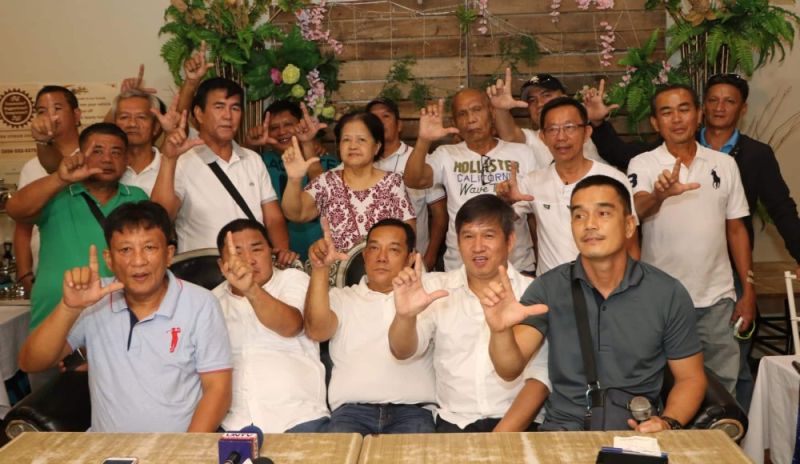 A WEEK before the actual election day, several former village officials of the City of San Fernando gathered on Monday, May 6 to pledge their support for Vice Mayor Jimmy Lazatin.

At least 12 former village chiefs, as well as seven former councilmen (kagawad), publicly declared their support to the re-election bid of Lazatin during a press conference held at the Bale Capampangan here.

Former barangay Quebiawan kagawad Aris David said the group decided to finally stand up to disprove claims made by fellow ex-village officials recently, which “are aimed at discrediting Lazatin and his track record.”

Recently, 10 former village chiefs from this capital city allegedly shifted their support to vice-mayoralty bet Councilor Angie Hizon, claiming that Lazatin did nothing and failed to deliver services to the people during his incumbency.

He particularly noted several projects spearheaded by Lazatin and his family, including construction of a road in Barangay Lourdes, the financial and moral support given to Barangay Telabastagan that led to its back-to-back championship in the Giant Lantern Festival, the establishment of material recovery facilities, and the scholarship grants and other financial assistance given by the incumbent vice mayor that aided Fernandino families.

Former Barangay Del Rosario chairman Reggie Del Rosario, meanwhile, said he has known the Lazatins long before he became active and eventually joined politics because of his dedication to develop the education sector.

He recalled how Lazatin immediately came to the rescue during times of calamities, especially when a bridge in their village was destroyed by flood and affected their community.

He noted the several ordinances passed under Lazatin’s leadership in the city council which include plastic ban, free cinema viewing, and resort entry for senior citizens, among others.

Former three-term San Isidro barangay captain Nestor Lingat, for his part, attested to how Lazatin was helpful and easy to deal with, even when he was still a councilor.

He credited Lazatin for the establishment of a public high school in Barangay San Isidro that is still being utilized by students up to now.