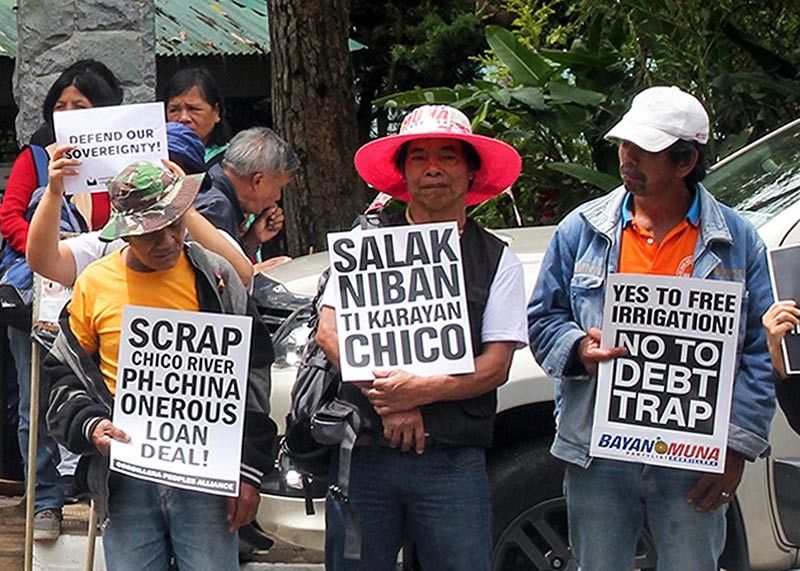 BENGUET. Militant groups rally in front of NEDA–CAR to protest against the ongoing construction of the China-funded Chico River Pump Irrigation Project in Kalinga province. (Photo by Jean Nicole Cortes)

THE presence of Chinese workers at the Chico River Pump Irrigation Project (PIP) in Pinukpuk, Kalinga was confirmed by the National Irrigation Administration (NIA).

In a statement, NIA said “the 66 Chinese workers hired by the Chinese contractor are highly technical and highly skilled who are needed in the construction of the tunnel and pumping station, the completion of which is targeted before the end of this year. Once completed, the services of most of these Chinese workers will be terminated.”

The NIA clarified there are 347 Filipino workers, mostly hired from the area.

NIA is implementing the P4.37-billion Chico River PIP with Chinese contractors funded by a loan from China which is seen to irrigate elevated rice fields through a pumping station, and not through a diversion dam or a reservoir, contrary to what several opposing groups say that this project will pose danger to residents of the locality.

The water from the river will flow through a tunnel system until it reaches the main canals at the elevated rice fields.

Chico River PIP has a total service area of 8,700 hectares to be provided with a substantial and timely water supply for irrigation. A total of 4,350 farmer-beneficiaries and their families will benefit from this project. It is projected to provide 14,784 jobs during its project implementation and 8,700 permanent jobs when it becomes operational.

“NIA assures that there are no oppositions from the affected communities of the Chico River PIP. Displaced families are supportive of the project and were fairly compensated. The LGUs and other stakeholders are well-informed on the development of the project,” NIA added.

Adamant about its allegations, the Cordillera Peoples Alliance (CPA) held a protest march on the alleged anomalies surrounding the project.

Windel Bolinget, CPA chairperson, said the deal has violated the Free Prior and Informed Consent (FPIC) of the affected indigenous communities in barangays Katabbogan and Pinococ, Pinukpuk, Kalinga and is disadvantageous not only to the people but to the environment.

“Contrary to the claim of the NCIP, there is no FPIC for the project. Even the process to acquire FPIC in accordance with the 2012 FPIC Guidelines was not completed since no Certificate of Precondition has been issued. The consultation meetings and the Memorandum of Agreement between NIA-R02 and communities in the affected ancestral domains were only part of the FPIC process and do not already mean FPIC,” Bolinget said.

The picket was held at the Regional Development Council – National Economic and Development Administration (RDC-NEDA) regional office during the meeting of the RDC-NEDA, National Commission on Indigenous Peoples (NCIP), National Irrigation Authority – Region 2 (NIA-RO2), and the Department of Environment and Natural Resources (DENR) – Region 2 to discuss issues on the CRPIP.

The CPA also cries foul over the lack of an Environment Compliance Certificate (ECC) for the project from the DENR-CAR. It has ECC from the DENR office in Region 2 but the activities with environmental damages and disturbances, such as tree cutting and earth moving activities, are within the project construction area in Pinukpuk, Kalinga.