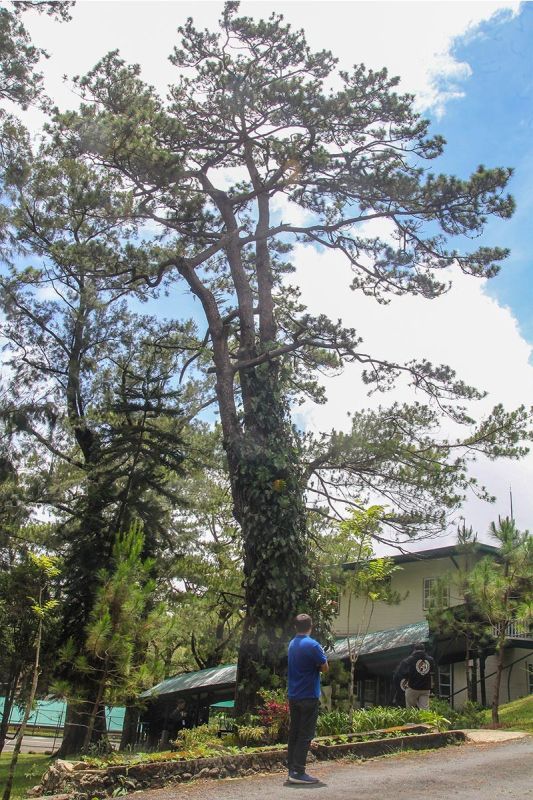 BAGUIO. Baguio City’s oldest pine tree stands tall inside Brent International School which is estimated to be at 130 to 150 years old. (Photo by Jean Nicole Cortes)

BAGUIO City’s oldest pine tree (pinus kesiya) with an estimate age of 130 to 150 years old can be found inside the compound of Brent School in Baguio City.

In simple awarding rites, the winners of the search for biggest and oldest Pine Tree conducted by the Provincial Environment Natural Resources Office (Penro) in Benguet and the Department of Natural Resources (DENR)-Cordillera was awarded May 7 in Wangal, La Trinidad, Benguet.

Hailed biggest and oldest Pine Tree was the entry of Brent International School with an estimated age of 130 to 150 years old with 410 centimeters circumference and an estimated height of 16 meters.

Two entries from Camp John Hay with an estimated height of 16 and 15 meters at 110 to 130 years old placed second and third, respectively.

There were six participants who qualified. The search started February 26 and ended February 28.

Carlos Arida, Benguet provincial environment and natural resources officer, said the awarding is a result of the instruction of DENR Secretary Roy Cimatu after his visit earlier this year.

He added there was prior realization of the need of inventory of live and death trees.

Dick Robbins, president and CEO of Brent Schools and head master of Brent School in Baguio told SunStar Baguio the recently hailed oldest tree is in a protected area where students passed by.

“We are very honored to have that this tree, and thousands more. The significant thing is in the past hundred years we’ve continuously planted trees here,” he added.

DENR-Cordillera director Ralph Pablo instructed his personnel to estimate the needed materials to install a marker and put information about the identified oldest tree.

Pablo added prior to the determination of ages and inventory of Benguet pine trees, there are still relatively young pine trees between ages 20 to 30 years old pine trees.

Previously, a pine tree more than 230 years old in Mines View was recommended by the City Environment and Natural Resources as the oldest pine tree. Unfortunately, when Typhoon Ompong hit the city in 2018, the pine tree collapsed.