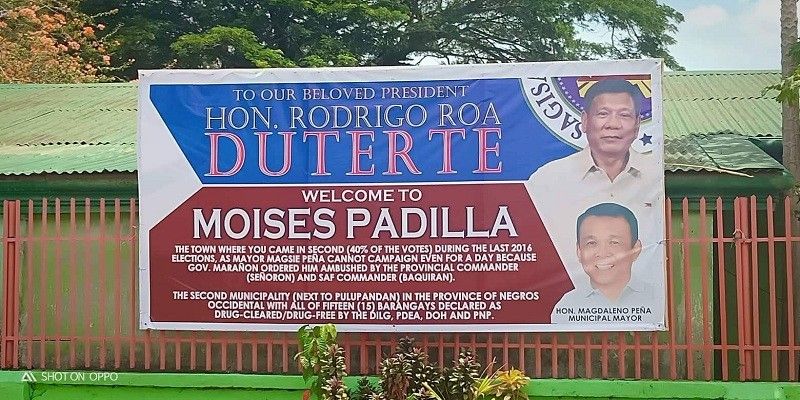 NEGROS. The tarpaulin reportedly hanged at the entrance of Moises Padilla before the President’s arrival on Wednesday, May 8. (Contributed photo)

GOVERNOR Alfredo Marañon lamented on what he labelled as black propaganda against him, Wednesday, May 8.

“The claims made by Moises Padilla Mayor Magsie Peña only indicate that he is in a state of panic pending his imminent rejection by the people of the town that he had terrorized the last three years,” Marañon in a statement said.

The governor made the reaction after a tarpaulin at the entrance of Moises Padilla was placed on Wednesday bearing Peñas welcome message to President Rodrigo Duterte and also allegedly narrated that Marañon masterminded the ambush against him in 2016.

“I cannot overemphasize that the mayor is enraged by the people's strong support to his rival, Vice Mayor Ella Garcia-Yulo, especially after the brutal murders of reelectionist Michael Garcia, his own grandson, and former ABC president Mark Garcia, his own nephew, which were all linked to him and his henchmen. Such black propaganda campaign has no place in a decent society like ours. It is also indicative of one's mental state to concoct a story wanting in truth,” the governor said.

Marañon further said that such allegations are certainly fabricated lies and can easily be debunked.

“He is also out of touch from reality the fact that--and it is an open secret--despite his win in 2016, he is an absentee mayor. Enough of this black propaganda. Enough of these threats and harassments. The Negrenses know better,” Marañon added.

The said tarpaulin however was removed before Duterte's arrival in Moises Padilla for unknown reason. (TDE)