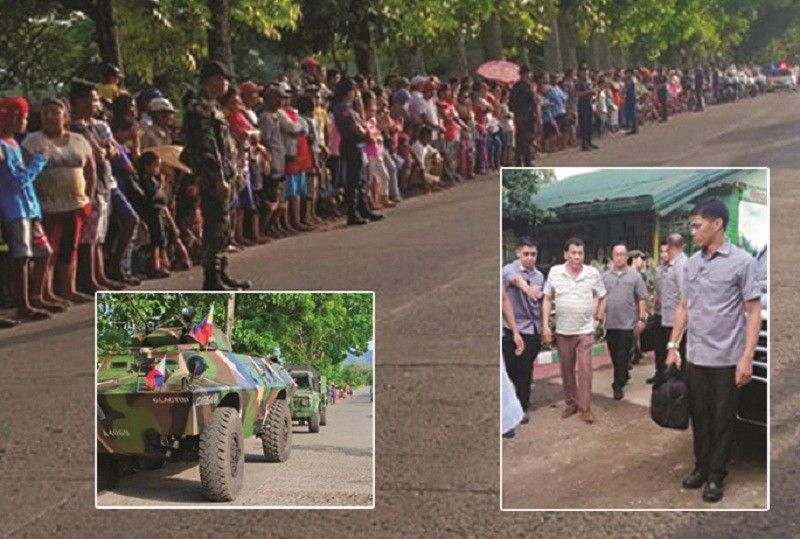 NEGROS. President Rodrigo Duterte (inset right) during his arrival at the Moises Padilla Elementary School where he held a Command Conference on Wednesday, May 8. People waited outside the school to have a glance at the President. Military armored cars (inset left) patrol the vicinity since the town was placed under Commission on Elections control. (Teresa Ellera/ Contributed photo)

VICE Mayor Ella Garcia-Yulo revealed that she was assured by President Rodrigo Duterte of justice for the ambush of her nephew Councilor Michael Garcia and her brother Mark Garcia.

Former Special Assistant to the President Christopher Lawrence Go was with the President during their meeting in a room at Moises Padilla Elementary School.

The President also met with Moises Padilla Mayor Magdaleno Peña in a separate room before he held a Command Conference here with the Philippine National Police (PNP) and the military.

Garcia said that she was earlier informed by the appointment officer of President Duterte to come to the venue to meet with the President.

“The meeting was only short, but at least we got the assurance from the President,” she said.

Peña and Garcia went out from the venue ahead of Duterte and his entourage.

For his part Mayor Magdaleno Pena said that he reported about drug situation and the peace and order situation in the town.

The President emphasized about the Commission on Elections control in the area, Pena said.

Pena did not elaborate of his one-on-one meeting with Duterte which lasted for about 20 minutes.

“I want a peaceful election here,” the President said and Pena responded that “it will be done. You're the boss,”.

Meanwhile, Lieutenant Colonel Adrian Accolador was replaced on Wednesday, May 8, by Captain Harold Rendora as officer-in-charge of the Moises Padilla PNP.

Accolador stays as commander of the Special Task Group in Moises Padilla, La Castellana and Isabela.

Defense Secretary Delfin Lorenzana and Department of Interior and Local Government Secretary Eduardo Ano were with Duterte in Moises Padilla.