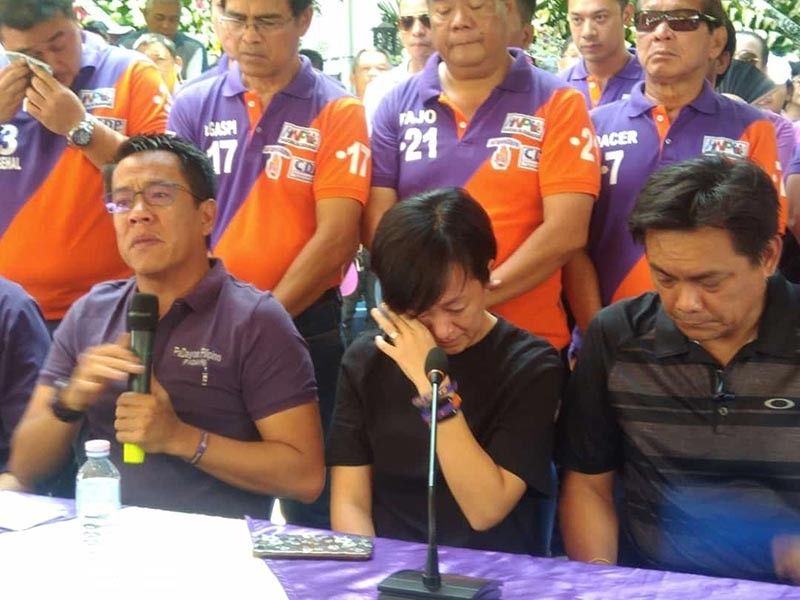 Nadya’s hands were raised by the entire Padayon Pilipino-Centrist Democratic Party coalition slate during a press conference on Thursday, May 9, at the wake in Sta. Cecilia village Gusa, this city.

“Lisod akong kabutang kay two days na lang unya ginakampanya nako is akong amahan nga si Dongkoy as vice mayor (I am in a hard situation now that it’s only two days left before the elections, and I have been campaigning for my father, Dongkoy, as vice mayor). But whatever the outcome, I am here to fight with my party para sa katawhan (for the people),” Nadya said.

“Akong nahibal-an daghan kaayo nag-suporta busa mapasalamaton ako sa inyong support sa akong amahan (As far as I know, there are many who showed support that is why I am thankful to the support you gave to my father),” she added.

Nadya, who was emotional while speaking to reporters, said her father would have wanted her to take his place, even as she thanked the people who throw support and sympathy during the family’s trying times.

She also said that she can never be another Dongkoy, but she vowed to deliver the best public service, should she be given the opportunity to be the city's second top official.

“I can never be another Dongkoy but ako maningkamot nga makahatag serbisyo nga pareho sa akong amahan (I will strive to give a service the same as my father). I'm sure he would wanted nga (that) I would run or substitute sa iya kay dili niya gusto nga mabiyaan ang mga kauban ug katawhan (to him because, he will not want that our colleagues and the people be left behind) who believe in him,” Nadya said.

The last-termer councilor has been visiting the villages and communities during the campaign sorties to convince people to pick her father as vice mayor.

She was also helping her husband, provincial board member president “Prexy” Elipe who seeks the vice gubernatorial seat in the province.

While Nadya and Prexy have already agreed before that only one of them would run for a position because of family concerns, the latter said they could not refuse the call and request of the people to pursue Dongkoy's vice mayoral bid.

The vice gubernatorial bet asked the people of the city to support Nadya.

(We talked it over before that our family is small, and our children are still small, and I could not last long if both of us are campaigning, but now this happened, it's not also possible to just let go of the opportunity to help other people, especially that’s what Dongkoy believed and stood for.)

Misamis Oriental governor Yevgeny Emano, who was also in tears while facing the media, said the family, the party and the coalition have agreed to have Nadya substitute her father in a bid to serve the people and lead the city's legislative branch.

(We agreed to the request of our colleagues, from the party and the people. This afternoon, Nadya Emano will be the substitute. I thank her despite we are short of time, no matter what the result of Nadya’s candidacy will be, we are thankful of the people.)

Emano said the party is now complying with the requirements and has prepared all necessary documents for the replacement before the Commission on Elections.