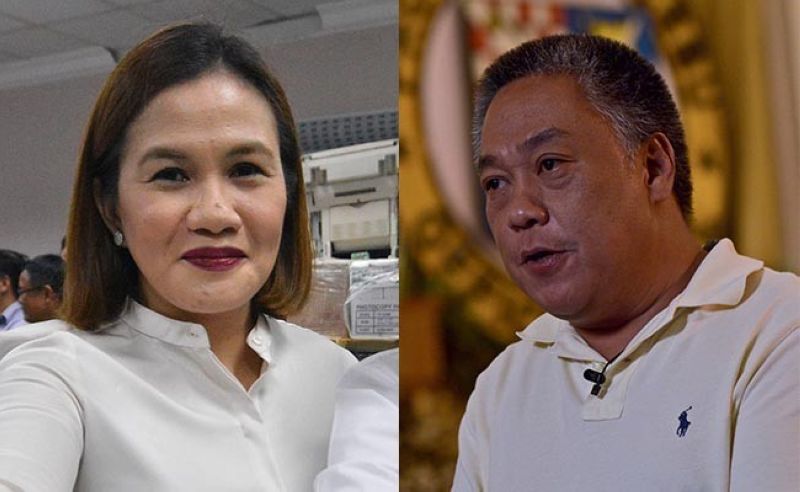 The 46-year-old mother of three was set to marry her partner in November last year, but she heeded her father’s request to join forces with Garcia. The wedding has been postponed to a date after the elections.

For the May 13 midterm elections, Davide has opted to run for vice governor, while Magpale is running for governor. Davide is running under the Liberal Party, while Magpale represents Barug Alang sa Kauswagan ug Demokrasya (Bakud)/Nationalist People’s Coalition (NPC).

Davide’s decision not to seek his third and last term baffled several Capitol observers, including his political nemeses.

“Our tandem was born out of honest-to-goodness partnership. And I firmly believe with Agnes at the helm, our beloved Cebu will continue to journey in the path of good governance. We both believe that positions are only temporary. What is truly permanent is our passion to help and serve our fellow Cebuanos,” Davide said.

Davide did not elaborate on the reasons behind his decision to not seek his last term.

For her part, Salimbangon is not a stranger to politics. She challenged then incumbent Bogo City mayor Celestino “Junie” Martinez Jr. in the 2013 midterm elections, but lost.

She ran again for a seat in the City Council in the 2016 presidential elections but lost for the second time.

Political observers have described Bogo City as a stronghold of the Martinezes. The Salimbangons have made several attempts to defeat the Martinez dynasty in the city, but they often failed.

Salimbangon said she has great respect for Garcia, whom she considers like her mother. The families of Garcia and Salimbangon are close to each other.

In separate sessions of Klarohay Ta! Mega Cebu Candidates Forum held at the University of San Carlos (USC)-Downtown Campus on April 5, the vice gubernatorial candidates answered key issues raised in the forum. Here are the excerpts of their responses:

What do you think is the solution to the burgeoning traffic in Cebu?

DAVIDE: As chair of MCDCB (Metro Cebu Development and Coordinating Board) I already brought up the discussion of a mass transport system in 2013 when I assumed office. We have already endorsed projects to the national agencies for funding. In fact, through MCDCB, we were able to secure funding amounting to P80 million for the feasibility study of the Naga to Danao road. And I think it was last month that it came out in the newspapers that Phase 1 of the project, which is the Naga-Minglanilla section, had already started.

But what will really help solve this problem is the cooperation of everybody, of all LGUs (local government units). That’s the key and the private sector, of course and the Jica (Japan International Cooperation Agency) studies that were presented to us by Mega Cebu. For me, it was big and very useful.

But our problem is really funding. We need someone to bring this to Neda (National Economic and Development Authority) so this will be given priority. On the part of the Provincial Government, we already have a focal person who is taking charge of this problem after that Minglanilla traffic in 2017.

SALIMBANGON: My simple opinion regarding traffic is discipline. I will admit, sometimes we don’t have discipline when we drive. If we go to Hong Kong, Singapore, for example, how come we follow their traffic rules and regulations? But in our own country, we are hard-headed. Like, in my experience in going to the north (of Cebu) people ask that the roads be widened. Now that this was done, we see people setting up tents and holding their wake along the road. So (that’s) another cause of traffic. We have been telling people not to park on the road but they still do it. That is another cause of traffic. So for me, it’s simply discipline. And we cannot tell everybody nga “Hey, this is what you should do.” I think it should start from us.

What do you think is the ideal mass transport system? BRT? LRT? Or both?

DAVIDE: BRT (Bus Rapid Transit). As early as 2004, when I was still a councilor of Cebu City, I already knew that. That is Mayor Tommy Osmeña’s baby (and) I support that. I just don’t know why it is taking so long. What I know is that it already has the approval of the World Bank. I just don’t know why it’s delayed. I think one public official blocked it. I believe this should be implemented already because this has been a while. This will really help decongest also the traffic here in Cebu City, which is really the center. All cars, all public utility vehicles from the north to south will pass here (Cebu City). I understand the technical working group of that BRT project has already made its recommendations. I believe they also studied the routes of the BRT. They saw that this is doable. There may be some roads that need expanding, but I know that there is a section that will pass Escario (street), where the 20-story building of the Provincial Capitol will be built. So, it will not be a problem (to traffic). They have already studied it.

How can you support President Duterte’s Universal Healthcare?

SALIMBANGON: In the fourth district, my father launched the health card. We have provided funds at Vicente Sotto Memorial Medical Center. We have funds in Eversley Childs Sanitarium Hospital. All our constituents were given these so if they get hospitalized they will no longer pay. Absolutely zero.

DAVIDE: This is a first in Cebu particularly in provincial and district hospitals. We have an intensive care unit in Carcar. That is a provincial hospital. We will have one soon in Balamban. Now as mentioned by (future) governor Agnes, all provincial hospitals have surgical capability already. This was never the situation before. We have acquired a new equipment and instruments; we’re building new facilities and wards in Carcar and Bogo especially. And then we also have the knee surgeries in the Carcar Provincial Hospital, cataract operations in Balamban (Provincial Hospital). Our purpose here is for patients who come from far-flung areas to no longer go to Vicente Sotto. That is why we are upgrading these hospitals to reduce referrals to Vicente Sotto and our hospitals will also learn from Philhealth. We are continually upgrading our district hospitals. It is difficult to run a hospital. It depends on (future) governor Magpale when she’s there already. But we are also encouraging rural health units, the municipal health clinics of our LGUs to really help our efforts to improve our health care services.

How will you bring back the confidence or that sense of security among the people walking on the streets? Do you agree with the Duterte administration’s way of fighting drugs?

DAVIDE: Even prior to the assumption of President Duterte, we already had our program. Probably we’re the only province that has a department which is the Cebu Provincial Anti-Drug Abuse Office (Cpadao). This is very active in our community-based rehab program for drug surrenderers. I believe we have helped a lot including the LGUs. We give awards to LGUs who are also active in the fight against drugs. I think the issue here is the number of deaths. Me, I’m not in favor of EJKs (extrajudicial killings). I always believe in giving an offender due process because we believe in the rule of law. But there are instances that during a buy-bust operation, the offender will resist. And the police will be forced to defend themselves, which I think is justifiable.

What are the policies that you want to pioneer if elected as vice governor that will address the drug problem in Cebu?

SALIMBANGON: First of all, I will go back to discipline. Our drug problem has been an ongoing problem ever since. Whoever is the sitting president, it’s already there. It’s only now that the President is giving priority to stop the drug problem in the Philippines.

The problem here I think is we at the private sector should work with the government to address the issue of the drug problem.