Enrile vows to use institutional memory in fresh Senate term 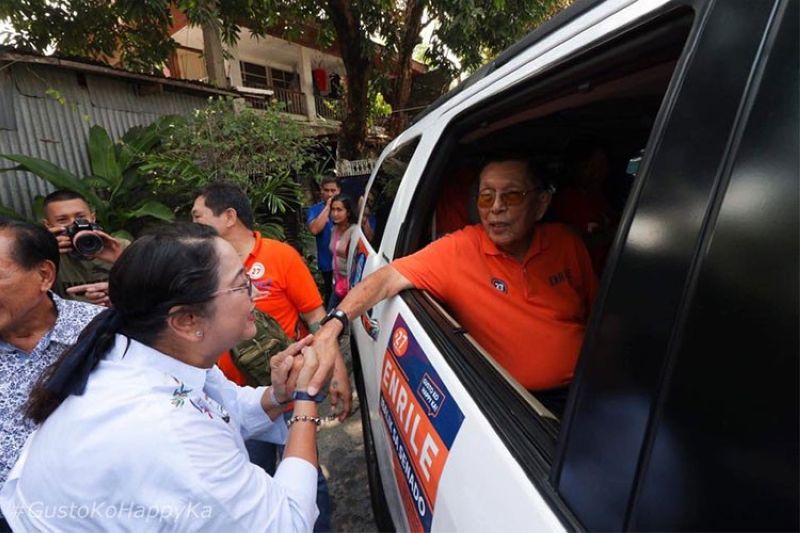 SENATORIAL candidate and former Senate President Juan Ponce Enrile vowed to use his institutional memory from 50 years of service in government if elected in the upcoming elections.

"I intend to bring all my years of experience, knowledge, and recollection of past laws, programs, and events for this last term in the Upper Chamber. Apart from what I learned in four terms as senator and then as Senate President, and also as heads of different agencies, I have also extensively studied the new problems that are hounding the Philippines," Enrile said as he spoke to supporters on his campaign trail in Metro Manila.

"I have never been more ready to serve as Senator as I am now," he added.

At 95 years old, Enrile showed no signs of stopping as he hopped from Mandaluyong to San Juan and Caloocan on Thursday, May 9, and Cainta and Pasig on Friday, May 10, in the run-up to Election Day.

Enrile, if elected, will be the oldest senator in Philippine history.

"During the campaign, I forgot that I was 95 years old. In my campaign, in fact, it is the young people who have been the most supportive," he said.

In a light moment, he said he was grateful for the opportunity to run and serve the people again.

“When I was in the Senate, I did what was supposed to be done. I worked for laws that would benefit the people,” Enrile said.

Enrile served in the Senate for four terms, the first was from 1987 to 1992, when he was the lone minority. His second term was from 1995 to 2001, during which he was designated as chairman of the Committees on Ways and Means, and Government Corporations and Public Enterprises. He also served in the House of Representatives from 1992 to 1995.

During his incumbency, he gave priority to measures reviewing the performance of the power sector to promote consumer welfare, promoting competition among the industries, and the protection of the public from threats and acts of terrorism. His anti-terrorism bill was eventually enacted as the Human Security Act of 2007.

In 2004, he ran for senator again and was elected to the 13th Congress where he resumed pursuing his major advocacies. In 2010, he won his fourth term in the Senate.

He actively participated in plenary debates and was constantly vigilant over vital pieces of legislation taken up on the Floor, such as the Sin Taxes Law (RA 9334), Expanded Value Added Tax or EVAT (RA 9337), Biofuels Act (RA 9367), Amendments to the Automated Elections System (RA 9369), and the General Appropriations Act, among others.

As Senate President from 2008 to 2013, Enrile was also fondly remembered for his role in the impeachment of former Chief Justice Renato Corona.

In this year's elections, which he said may be his last, he vowed to pursue the same advocacies with the same vigor.

"The fight is not yet over. The problems of our country are ongoing. We have new challenges in terms of foreign relations, military threats, taxation, technology, and, in the Senate, I will make sure to prioritize addressing these problems," he said.

"I do not desire power or money or fame. At the tail end of my life, I merely want to serve and leave a lasting legacy to the Filipino people," Enrile said. (PR)