One team, One dream, Two titles 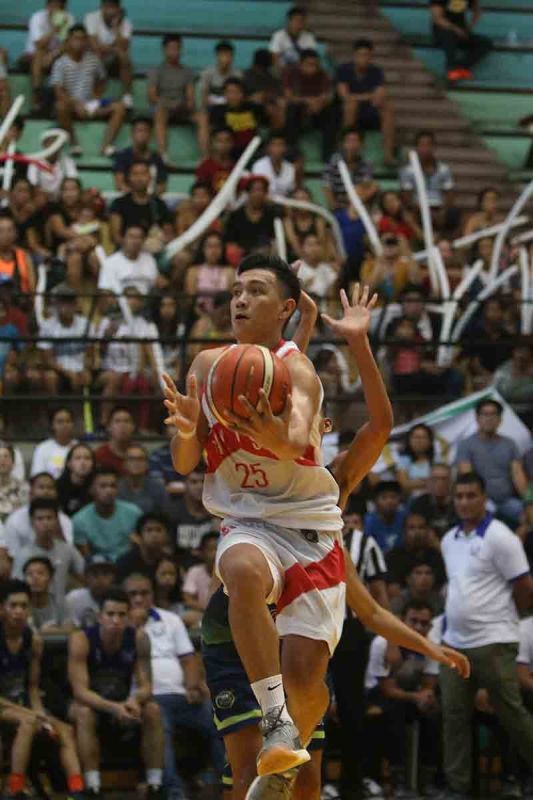 DIFFERENT STORY. Mandaue City came out strong in the third quarter but unlike in Game 2, Talisay City had an answer and the Aquastars won their second straight Governor’s Cup title. (SunStar Photo/ Alex Badayos)

DURING yesterday’s Game 3 of the Governor’s Cup Inter-Cities Basketball Tournament, members of the Talisay City Aquastars wore shirts that read: One team. One dream.

They can add another line to that.

The Aquastars survived the last ditch rally of the Mandaue City Ballers, 74-69, in Game 3 of the best-of-three championship series at the University of San Carlos Gym on Saturday, May 11.

Lefty wingman Keaton Clyde Taburnal scored the crucial points in the payoff period to give Talisay City some breathing room. Taburnal drilled a fade away shot over the defense of Mandaue City Kenneth Jove Brillo with 1:18 to play.

Talisay City got the ball possession on a steal before Taburnal was fouled and made two free throws to give Talisay City a six-point lead, 72-66, with 52.2 seconds to play.

“It was a good defense from Brillo. I did not think that it would go in. I just went hard on the play,” said the 18-year-old Taburnal in Cebuano, who scored six of his 11 points in crunch time.

Ruedas missed another pair of free throws with 16.1 seconds left, but his teammate Jhaylord Castro was there to get the rebound as the Talisay City side roared in celebration.

“This win was because of the hard work of my players. Mandaue City was a great team, well-coached and has good players,” said Talisay City head coach Rey Michael Guerra. “We got lucky against them.”

Talisay City was trailing 20-14 after the opening period before a 10-2 blitz anchored by Kendrick Abarquez, Ruedas, Raffy Bacasmas and Taburnal early in the second period enabled them to gain a 24-20 lead.

Deiparine ended the second period with a buzzer-beating floater to stretch Talisay City’s lead to 40-31 at half time.

Mandaue City again came out of the locker room blazing just like in Game 2, rushing to a 10-2 run courtesy of Paul John Sungahid, Lemuel Jake Gonzaga, Brillo and Cometa.

But unlike in Game 2, Talisay City found the answer and responded with its own 16-7 rally capped by Deiparine’s three-point shot with 33 seconds left. Talisay City entered the final period with a double-digit lead, 58-48.

“I told my boys to relax and to not be pressured. We played our game and adjusted on the pressing defense of Mandaue City,” Guerra said of the back-and-forth action in the third quarter.

Deiparine finished with a game-high 24 points on top of seven rebounds, three steals and one assist. Ruedas chipped in 13 points, eight rebounds and three assists, while Ronan Briones handed 10.

“I commend him for his defense. Our defense was a big key for us. We really needed to limit Cometa for us to win,” he said.

Cometa finished with 19 points on a 6-of-20 shooting, while Gonzaga added 14 and Sungahid had 12.

Talisay City scored at will inside with 50 points in the paint against the 28 of Mandaue City. The Aquastars also controlled the open court with 26 fast break points.

“We dedicate this win to all Talisay City supporters, especially those who came here to support us,” said Guerra.