How powerful is the seniors’ vote? 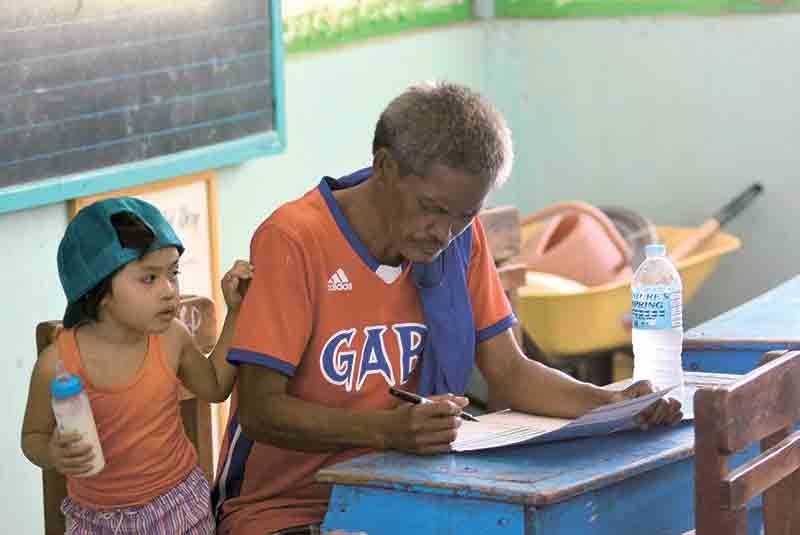 INHERENT RIGHT. In this file photo, a senior citizen votes inside a polling precinct while his grandchild waits for him to finish casting his vote. (SunStar File Photo)

NOT even the glasses threatening to fall off her nose bridge could deter the seriousness in Lucia’s (not her real name) face as she skims through what seems to be a list.

Sensing someone approach her, the 65-year-old widow from Cebu City quickly folded the paper and held it tight in her fist.

Her face was now completely devoid of the earlier seriousness, but was easily replaced by a guarded look.

Asked what she was doing, Lucia replied: “Nangandam ko sa akong mga pilion inig Lunes, pero dili ko mosaba kinsa ni sila (I am preparing whom to vote for on Monday, May 13, but I won’t be revealing who they are).”

An active voter for 47 years now, Lucia said she takes the elections seriously and has always kept to herself which candidates she is supporting.

“I just prefer to keep quiet, but I hope those that will be elected will not forget about old people like me. I have benefitted from the financial assistance (of the City Government), but I also look forward to other programs for senior citizens,” she said in Cebuano.

In Cebu, some local government units (LGU) provide their senior citizens with an annual financial assistance ranging from P7,000 to P12,000, giving rise to speculation that incumbent officials are using this as a means to court their votes.

The cash aid is divided into tranches with distributions done monthly, quarterly or biannually.

This, despite the senior citizens bloc being the minority in the voting population of Cebu.

The number of registered senior citizen voters, those aged 60 and above, was 407,863 or 14 percent of voters in Cebu.

So just how powerful is the senior citizens bloc as voters?

According to Acting Cebu Provincial Elections Supervisor Jerome Brillantes, while they cannot ascertain how much influence the elderly hold as voters, it is the Comelec’s duty to ensure that senior citizens are able to participate in the electoral process.

“We don’t have a concrete inventory of our registered voters that are senior citizens or persons with disability, but we make sure that they are given the privilege such as by establishing express lanes and allocating the ground floors as accessible polling places for them, too,” he said.

It was the Cebu City Government that pioneered the program, with the cities of Lapu-Lapu and Mandaue taking the same initiative.

Through City Ordinance 2453, senior citizens who voted in the 2010 polls are considered qualifiers of the program.

Last February, a proposed amendatory ordinance, which seeks to include senior citizens who turned 60 years old in 2013 in the list of qualified beneficiaries, was filed before the Cebu City Council.

But in 2016, after assuming office, Mayor Tomas Osmeña initially wanted to screen the current beneficiaries to ensure that those who receive them are only Cebu City voters since 2008, or lumads (natives) of the city.

It was in 2008 when the City started giving cash aid to the elderly. At the time, there were only around 25,000 beneficiaries.

Osmeña later had a change of heart after meeting with Cebu Gov. Hilario Davide III, acknowledging that there are many people from the other parts of the province who relocated to the city.

In Mandaue, some 20,689 senior citizens are registered beneficiaries of the city’s yearly P8,000 cash aid.

Beneficiaries in this city are required to submit a copy of their birth certificate, a valid ID, 2x2 picture, community tax certificate and a voter’s registration record as proof of residency.

The Mandaue City Government, though, does not require its beneficiaries to have voted in the last elections, as long as the senior citizen resided in the city for the last three years.

Neighboring Lapu-Lapu, on the other hand, has 24,906 registered senior citizens who are entitled to P7,500 in financial assistance annually. Beneficiaries need only to present their senior citizen’s ID to claim their cash aid.

While voter’s registration may be a common requirement for the elderly applying for cash assistance, Brillantes said they are not obliged to vote.

“We can’t force them because elections is of free will. The right to vote is a free exercise, but of course, the failure to vote in two consecutive elections will constitute to deactivation of voter status. So they then have the option to reactivate or register with another LGU,” he added.