TWO days after the May 10 debate between Mayor Tomas Osmeña and Vice Mayor Edgar Labella, people were still talking about who really won.

Officially and technically, nobody won.

The face-off organized by the Cebu City chapter of the Integrated Bar of the Philippines (IBP) was a no-decision debate. No one, from the organizers’ staff or any independent panel authorized by IBP, had kept score. And IBP did not declare a winner towards the end of the forum.

So why the fuss over who won?

Because that’s what a no-decision debate does. It stirs interest among the public, particularly the so-called silent majority. Call them fence-sitters if you will: they would like to know who performed better. Even if they watched from their TV or their phone, they wanted to know from neutral sectors, the media among them, who out-punched whom.

The partisans from each camp who rooted for Tomas, the champion, and Labella, the challenger, were no accurate gauge. They were equally loud and lustful in their cheers.

[1] Long before each protagonist walked onto the Cebu City Sports Club stage at the Ayala Business Center, the person favored to win was Tomas. The mayor was the confident, sharp-witted and mean-spirited boss, used to wielding control, living the order or shouting the invective. The vice mayor was the careful man, slow-paced, moderate-toned and kindhearted in spirit.

Tomas would beat Edgar to a pulp: that was the thought of many people. Even Labella’s colleagues, including his running mate, former mayor Mike Rama, advised him against tangling with Tomas. The Jose “Boy” Cuenco experience in a similar face-off in 1987 was instructive. The mayor’s own mantra--never debate with anyone when you’re ahead--was drilled into the likes of Rama and, yes, Labella who were both mentored by Tomas.

[2] Immediately after the debate, Barug PDP-Laban, Labella’s party, set off the spin that their man won the debate. In social media, comments circulated how Edgar outscored Tomas in most of the topics. The two local papers, SunStar and Freeman, carried a four-page “false-over” cover (front and back and the insides) with the banner headline “Labella wins IBP debates.”

They were paid ads, prominently labeled as such on each page, part of legitimate propaganda.

Note that the newspaper stories that the media outlets produced in the news pages never said who won. In SunStar, the story on Page 4 (headlined “Debate gives voters sneak peek of candidates’ programs”) merely listed what each promised he would do. Which didn’t give enough information for the reader to know who struck whom and how.

Here’s the thing: Labella had been underrated and Tomas overrated, such that when the fight came and the champ didn’t do as well as expected Edgar came out honey and roses.

And the Labella camp made the claim and was not contradicted, largely because it would’ve been tough for the Osmeña team to make a counter-spin without turning it into an “I-won-you-didn’t” exchange.

Decidedly, Edgar got more from the debate than Tomas did. But how much it would affect the result of the elections could not be known, for now. 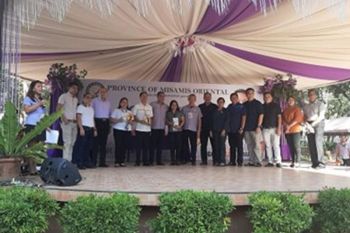