Bzzzzz: Using phone in polling place illegal; posting photo of ballot is not... Mayor's encounter with cop on motorcycle 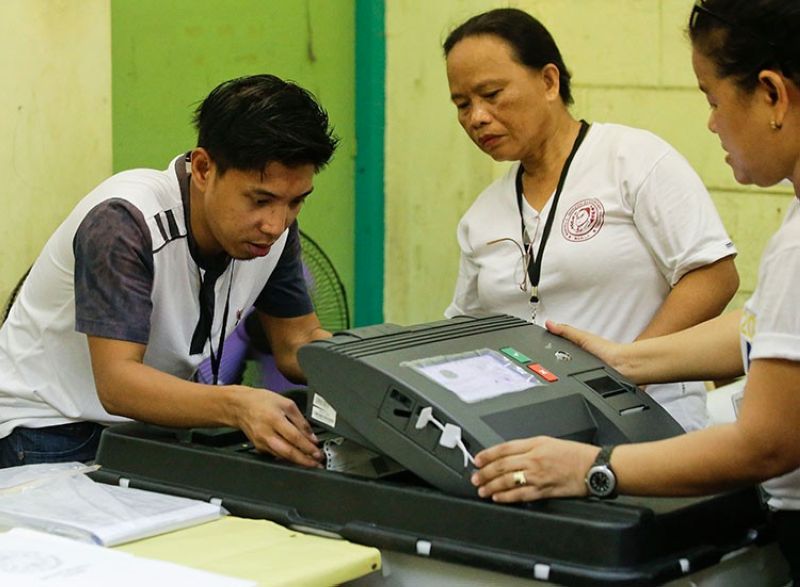 MANILA. Election workers try to fix a jammed ballot inside a counting machine at a polling center in the Manuel L. Quezon elementary school in Manila, Monday, May 13, 2019. (AP)

* THOSE MALFUNCTIONING VCMs. Rampant reports of vote counting machines that did not work, here and in other places in the country on election day, have angered voters and candidates. Comelec apparently misjudged its readiness after it had made final test on the machines. "Why did Comelec report that all VCMs passed the diagnostic tests?" lamented Senator Koko Pimentel. "Unintended inefficiency?" Senator Ping Lacson remarked.

* "TANGKE DI GIYERA," which is what townsfolk call any mean-look tank, highlighted, if nothing else, the seriousness with which police regard the peace and order problem in San Fernando, Cebu. The heated political rivalry in the town has been preceded with killings, with many of its officials -- including councilors, one of whom was a candidate for vice mayor -- executed or wounded. Among those injured in an ambush was the mayor herself, a candidate for reelection with her son as running mate, who substituted for her slain husband.

EXPLAINER. A voter who proudly posted on Facebook her ballot, showing the names of the candidates she voted for, was slammed for violating the law and Comelec regulations.

What crime or crimes did she commit?

She could bring her phone inside the polling place but she could not use it. Had she been caught using it, she could've been ordered arrested, as a Mandaue City explained at a SunStar forum. The purpose for the ban on the use of phones was to preserve the "integrity and secrecy" of the ballot.

She used the phone. And she posted the ballot. She may be sued for the first, which is expressly prohibited, but not for the second, which is her right under free speech.

The illegal use of the phone may be proved by the publication of the ballot. The question is whether anyone would care to sue and Comelec would have the time to attend to it. But first, they have to identify her.

QUESTIONS ON AUTHORITY. Cebu City Mayor Tomas Osmeña had a brush with the police again on an issue of law and order in the city. Early last Sunday (May 12), he reportedly stopped a CIDG patrolman on his motorcycle just when it was leaving Camp Sotero Cabahug for alleged violations of safety requirements.

Things the mayor allegedly did for which he may face complaints for carnapping and robbery Tuesday (May 14): impounding of the motorcycle driven by Pat. Ramil Granada Gelogo, "forcible" opening of his toolbox, and loss of Tag Heur watch valued at P150,000.

The mayor reportedly ordered members of Cebu City Transportation Office (CCTO), the former Citom, to impound the motorbike but they could not serve the citation. Driver Gelogo, asked by Tomas to present the vehicle's registration, driver's license, badge and I.D. but could not present any as he had left them, the rookie cop said, in his office.

Still, there are questions about Tomas's authority: Can he lawfully make the arrest? As mayor, does his supposed authority of supervision and control over the city police include effecting hands-on arrest for violation of motor vehicle law, or, as City Hall watchers put if, playing "polis-polis"? Do CCTO members have the authority to impound a vehicle for that kind of violation?

The motorcycle was not involved in a crime or in an accident. Perhaps for public safety, if one regards the vehicle's lack of a side mirror and the driver being in slippers as serious hazard to public safety.

The LTO, which has been at odds with the city over boundaries of authority on law enforcement, may wish to clarify it. LTO has insisted that CCTO members cannot be authorized by city ordinance to confiscate drivers licenses; only the LTO can deputize police and other law enforcers for that authority.

NOT CONTRABAND. It was not known if the cop owned the expensive watch. It could be that it belonged to someone else and was entrusted for safekeeping.

The reason the mayor ordered the box opened was not clear. Did he suspect contraband in it, maybe drugs -- or cash to buy votes? The mayor had gone to the camp to look into the reported arrest of four persons, including two youth council officers, that Sunday dawn for alleged vote-buying.

The watch was not by itself contraband although he may have to explain its ownership. It was not established yet if there was a watch.

SPREADING THE FEUD. With the ongoing feud between the mayor and the police, a CIDG member was quick to point out that the mayor could be venting his ire on all cops. Gelogo belongs to CIDG, a regional PNP unit, while Tomas's beef is on the city police led by chief Royina Garma.

The object of the mayor's distrust may have spread from the city police, the unit over which he technically has supervision and control, to other units. Regional police chief Debold Sinas is also a visible and audible actor in the spat played out on the public stage. Now the CIDG, or for that matter, any cop whom Tomas perceives as helping rival politicians battle the mayor.