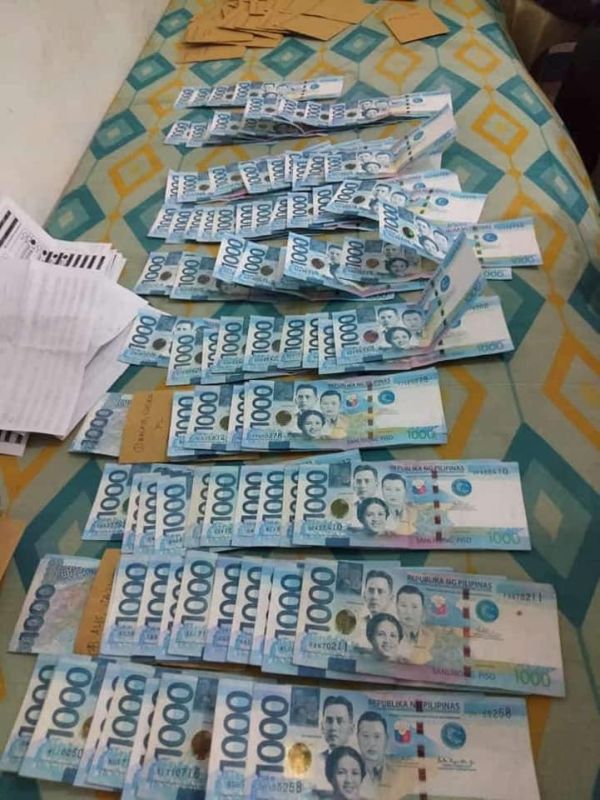 BACOLOD. Sample ballots with a total of P127,000 cash were recovered by E.B. Magalona Police from two persons at Barangay Tuburan in the said town this morning. (Contributed photo)

In Moises Padilla town, Lieutenant Col. Adrian Acollador, commander of Task Force MOLAI (for the towns of Moises Padilla, La Castellana and Isabela), said they arrested 28 persons, three of them minors, Sunday night, May 12 for vote-buying and violating the ban against campaigning on the eve of elections.

Acollador said they seized 12 sample ballots with two P500 bills stapled to each, and at least 600 loose sample ballots during a series of raids in the poblacion and neighboring Barangay Odiong.

The police also seized a passenger jeepney from the coastal town of Pulupandan.

The sample ballots recovered from the jeepney were printed with the names of candidates in the line-up of incumbent Mayor Magdaleno Peña, who is seeking reelection.

The suspects face charges of vote buying and violating the Omnibus Election Code that bans partisan political activity one day before the polls.

Acollador said he talked with Peña who admitted that he hired residents of his hometown of Pulupandan to distribute sample ballots.

Moises Padilla has been placed under the control of the Commission on Elections after a series of shooting incidents that claimed the lives of two councilors running for reelection - Jolomar Hilario, who was killed by New People’s Army guerrillas on March 31; and Michael Garcia, slain with his uncle Marc, a former town official, when gunmen attacked the convoy of Vice Mayor Ella Garcia-Yulo on April 25.

Bermudez said the Etang brothers yielded 127 brown envelopes containing a sample ballot with the names of EB Magalona mayoral bet Board Member David Lacson and his party mates, with P1,000 in cash each.

The Etang brothers tried to escape,on board a motorcycle, but they were held by members of the Barangay Peacekeeping ActionTeam members, Bermudez said.

The suspects told investigators that they got the money from a person they claimed they did not know in Barangay Lugway, Silay City.

Lt. General Fernando Mendez, PNP Deputy Chief for Administration who arrived in Moises Padilla Monday said that the PNP will be filing appropriate charges for Violation of the Omnibus Election Code against the suspects today.