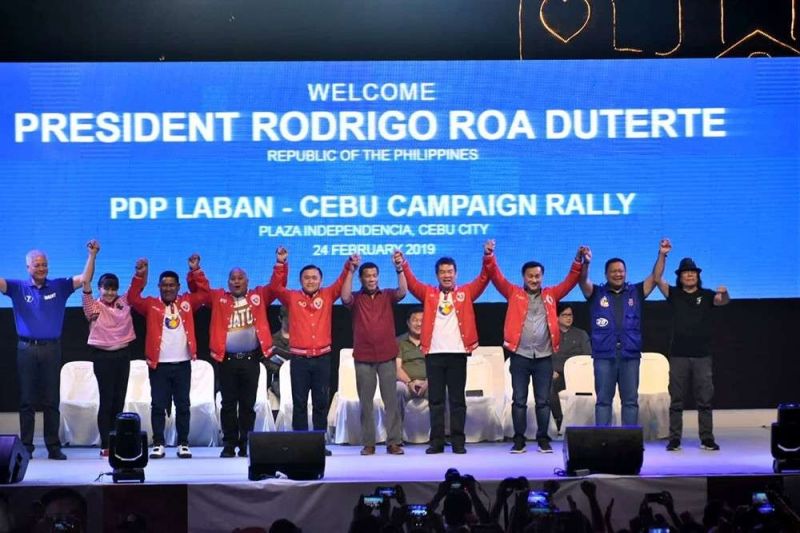 PRESIDENT Rodrigo Duterte's "magic" has apparently worked as majority of the administration-backed senatorial candidates are poised to win while all candidates of opposition senatorial slate Otso Diretso did not make it to the top 12, Malacañang said on Tuesday, May 14.

Speaking to Palace reporters, Presidential Spokesperson Salvador Panelo was elated by the seemingly decisive win of senatorial hopefuls who have the support of the Duterte administration.

"While the results of the elections are still unofficial, there appears to be an unstoppable trend towards a resounding victory of the administration’s favoured [senatorial] candidates," the Palace official said.

"Undoubtedly, the Duterte magic spelled the difference. The overwhelming majority of the electorate have responded to the call of the President to support those whom he said would help pass the laws supportive of his goal to uplift the masses of our people and give them comfortable lives they richly deserve," he added.

The statement came after partial and unofficial results of the 2019 senatorial race showed that most of the candidates dominating the top 12 slots were publicly endorsed by the President.

Nine of 12 senatorial bets with the highest number of votes are allied with the administration, based on the Commission of Elections' (Comelec) partial and unofficial data from over 94.67 percent of election returns as of 12:26 p.m., Tuesday.

Only Poe, Lapid, and Binay were not endorsed by Duterte.

Meantime, all eight senatorial candidates of Otso Diretso are headed for defeat in the 2019 midterm elections. Only reelectionist Senator Paolo Benigno Aquino IV is closest to the 12th spot.

Former Local Government Secretary Manuel Roxas II, an Otso Diretso candidate, is struggling as he is still in 16th place.

Panelo said the latest development merely proved that Filipino voters had brushed aside the "negative propaganda unleashed by the opposition, by the critics, by the detractors against the President and his administration."

"Some of which are the issues of extra-judicial killings, the war on drugs, the South China Sea, among others," he said.

"We therefore laud the Filipino electorate for expressing their will in the strongest and unequivocal manner. They have sent a message and we hope that the opposition and the rest of the country will receive that strong and resonant voice with acceptance," Panelo added.

Panelo said the apparent victory of the administration candidates and the defeat of the opposition bets send a "strong" message that Filipinos "yearn for stability and continuity of the genuine reforms that this Administration started."

Panelo, nevertheless, thanked the Otso Diretso candidates and supporters for "giving [their] best shot and fighting a good battle."

"As we have said repeatedly, we respect dissent as it vitalizes the democracy of our nation. In the end, however, it is the will of the people that prevails and we must respect the same," he said.

"While we expect dissent to continue, we hope that that same be demonstrated with fairness and within the bounds of the law, as well as with deference to the leaders duly chosen by us electorate. We have only one government, one nation, one flag. Together let us support it for the betterment of the Philippines that we all love," he added.

Panelo acknowledged this year's successful holding of the midterm polls demonstrated that the country has a "great order for democracy that can rise above the loud political noise."

He assured that the President would respect his allies's independence when they take their respective seats at the Senate in the upcoming 18th Congress.

He acknowledged that the Filipino people want a "constructive and not obstructionist Senate," which will help in crafting the President’s legislative agenda.

"If you will notice, the history of the Senate shows members of that chamber [are] independent ever since. No Senate has ever been under any president. They always rise above parties and considerations, when issues involve national interest, national security and the interest of the Filipino people," he said.

"They have to support the President when the agenda of the President is for the good of the people. And they will have to oppose it if they feel, in their conscience, that it run counter to the interest of the nation," Panelo added. (SunStar Philippines)