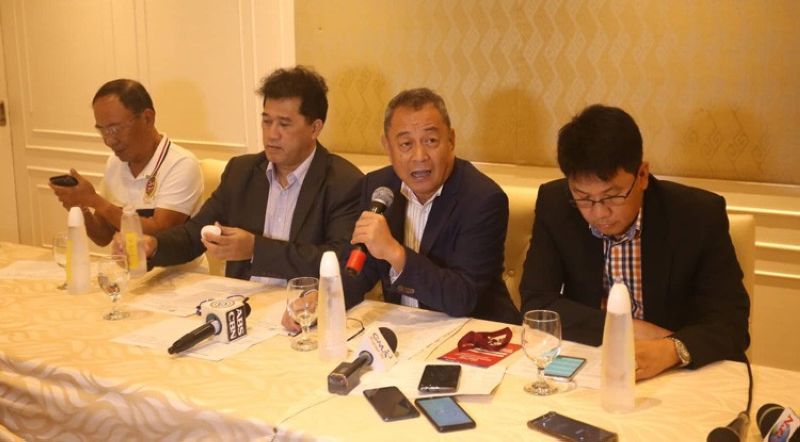 CEBU. Lawyer Marino Martinquilla (second, from right) and members of the legal team representing Cebu congresswoman and gubernatorial candidate Gwendolyn Garcia held a press conference on Tuesday, May 14, to urged interested bidders to no longer proceed with the scheduled bidding of around 1.4 hectares of real properties owned by the Cebu Provincial Government.

LAWYERS representing Cebu congresswoman and gubernatorial candidate Gwendolyn Garcia warned prospective bidders and members of the Capitol's Bids and Awards Committee (BAC) not to proceed with the scheduled bidding for the public-auctioned 1.4-hectare real properties owned by the Province.

Garcia, who is already garnering a wide lead in the gubernatorial race in Cebu, is set to be declared on Wednesday, May 16.

Lawyer Marino Martinquilla, a member of Garcia’s legal team, said in a press conference that the Cebu governor-electa is against the plan of outgoing Cebu Vice Gov. Agnes Magpale to sell 14 parcels of land owned by the Province.

Lawyer Lito Astillero, another member of Garcia's legal team, denied that the decision has nothing to do with politics since the election season is over.

“This issue nga she would have wanted to take during the campaign period, but wala lang niya gidayon nga pasanginlan napod siya og namulitika. Dili gyod ni pamulitika, but public service and the service is for the Cebuanos,” Astillero added.

Most of these lands are located in Cebu City particularly in Barangays Mabolo, Busay, Banilad, and Kamputhaw.

As scheduled, bidders are set to submit their respective bids on Wednesday, May 15.

The awarding of the Notice of Award to the winning bidder will be done on May 30 while the payment and execution of the Deed of Absolute Sale was initially scheduled on June 4 this year.

Martinquilla described the auction as a "clearance sale."