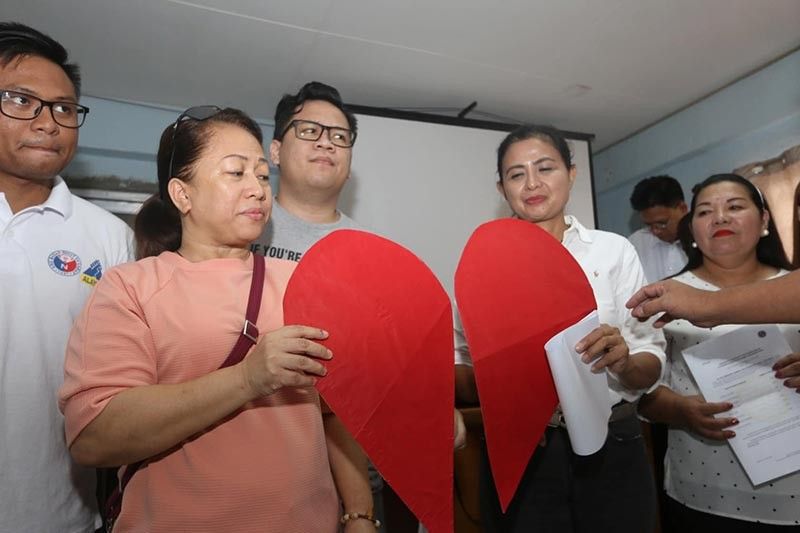 UNITY WITH A “HEART.” Winners in San Fernando, Cebu hold together a broken heart as a symbol of unity during their proclamation on Tuesday, May 14, at the Sangguniang Bayan legislative hall in San Fernando. (SunStar photo / Alex Badayos)

TEARS were shed and cheers rang as the mother-and-son tandem of San Fernando reelectionist Mayor Lakambini “Neneth” Reluya and son Ricci Regen were proclaimed winners on Tuesday, May 14.

The Reluyas win sealed the violent post-election period in the town when Reluya and her husband, Ricardo, were waylaid months before the midterm polls. Her son Ricci Regen substituted his father as candidate for vice mayor.

Reluya and her supporters were teary-eyed while some clutched their chests as emotions filled the Sangguniang Bayan legislative hall when the canvassing of votes closed and the Reluyas won in the counting.

In her speech, Neneth said they are offering their win to her slain husband.

“This is the proof that there is justice not only in Earth but also in heaven,” Reluya said.

Ricci, for his part, promised to protect the voters especially those who supported them in the mountain barangays. Some Reluya supporters were reportedly subjected to harassment prior to the election day.

“I will make sure that they will be taken care of. These people put their lives on the line just to ensure that they can deliver the votes that they have promised my father,” he said. (JOB)