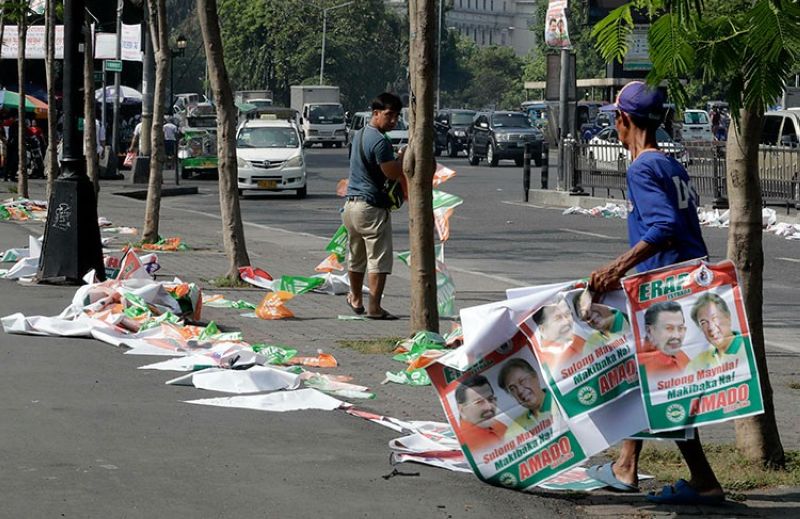 THE National Capital Region Police Office (NCRPO) has removed over 650,000 campaign materials all over Metro Manila.

NCRPO Director Major General Guillermo Eleazar urged the candidates to also do their part in the cleanup and removal of campaign materials.

As of Wednesday, May 15, 654,859 election materials in places outside common poster areas designated by the Commission on Elections (Comelec) have been removed under Oplan Baklas in coordination with the Metro Manila Development Authority.

“Whether or not the candidates won the Monday's elections, they should all serve as role models in cleaning up the campaign materials which came from them in the first place,” said Eleazar.

The midterm National and Local Elections were held Monday, May 13.

Eleazar commended his men for the successful implementation of security and safety measures during Monday's political exercise. No serious untoward incident happened was reported.

"I would like to express my gratitude to our policemen, the AFP, other security agencies and volunteers for their vigilance during the election period. Our collaborative efforts and sacrifices contributed to the success of the midterm election," said Eleazar.

"I extend my great appreciation to the public for their overflowing support and cooperation. Our desire to vote and be led by responsible leaders was achieved satisfactorily," he added.

In Metro Manila alone, a total of 411 suspects who sold, furnished, offered, bought, served, and took liquor during the liquor ban were arrested.

Eleazar also said 84 alleged vote buyers and 52 vote sellers, or a total of 136 individuals, were arrested under Oplan Kontra Bigay or the Anti-Vote Buying and Vote Selling Campaign.

For his part, Interior and Local Government Secretary Eduardo Año hailed all its attached agencies such as the Philippine National (PNP), Bureau of Fire Protection (BFP), and Bureau of Jail Management and Penology (BJMP) for the conduct of the generally peaceful 2019 elections.

“We are proud that the elections were generally peaceful and stable and that no major election-related violence was reported. All precincts opened on Monday and the Communist Terrorist groups as well as the Local Terrorist Groups were not able to disrupt the holding of the elections anywhere in the country,” he said.

“For this achievement, I congratulate the PNP led by General Oscar Albayalde and the 181,775 police officers who performed election duties for a job well done. I also wish to commend the more than 500 Comelec-deputized police officers who took the place of teachers as Board of Election Inspectors in various precincts in need of back-up poll workers. Your service to the nation made possible the success of this very important democratic exercise,” he added. (SunStar Philippines)