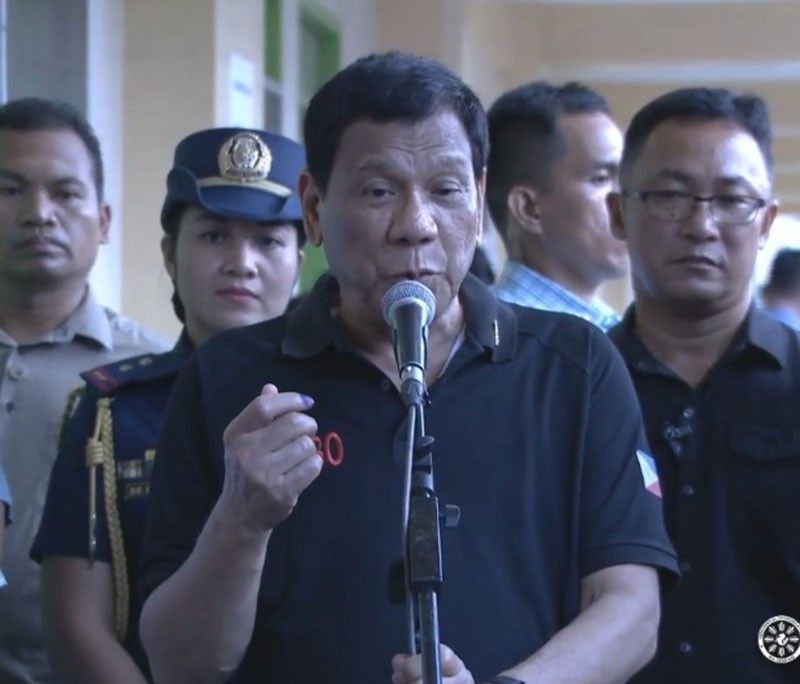 MANILA. President Rodrigo Duterte's "magic" has been cited for the impending victory of the senatorial bets he endorsed. (File Photo)

MALACAÑANG on Wednesday, May 15, advised the opposition's losing candidates in the 2019 midterm elections to just accept defeat.

Th advice was made after Bagong Alyansang Makabayan (Bayan) secretary general Renato Reyes alleged that the so-called President Rodrigo Duterte's "magic" consisted of strategies such as "systematic cheating and rigging of the elections."

In a statement issued Wednesday, Reyes claimed that the "Duterte magic" consists of use of government resources to "favor administration bets," as well as of the military and the police to "target and harass opposition groups, especially the progressive partylists and candidates."

The Bayan leader also claimed that "control" of the Commission on Elections and the "hocus-pocus" of the automated polls, martial law in Mindanao, and "government-sponsored disinformation" were also part of the so-called "Duterte magic."

In a separate statement, Presidential Spokesperson Salvador Panelo countered Reyes's accusation, which he said are not supported by any evidence or facts.

Panelo also stressed that the President would never intervene in the election process.

"All his claims have not been backed by any semblance of evidence and can easily be fact checked. For one, half of the commissioners of the Commission on Elections are appointees of former President Noynoy Aquino. In fact, supporters of the administration candidates remain vigilant to protect their votes from being altered," the Palace official said.

"President Duterte will never interfere with the election process, as well as frustrate the sovereign will of the people, for such is the very process which propelled him to the presidency," he added.

Reyes's remarks came after Panelo on Tuesday, May 14, cited the so-called "Duterte magic" for the impending victory of administration-allied senatorial candidates.

Panelo clarifed that "Duterte magic" refers to the "total package of sterling performance and good governance the President delivers to the people."

"It is also his empathy towards the ordinary Filipino as against those who, until now after the elections, cannot comprehend the voice of the majority opting to turn a blind eye to it," he said.

"It includes his decisive actions in resolving various local and national issues, as well as creating solutions to uplift the lives of the citizenry. These, among others, comprise the 'Duterte magic' which carried his candidates to a resounding victory," he added.

Panelo said the Palace was no longer surprised by Reyes's allegations, following the loss of many left-leaning party-list groups and their senatorial candidate Neri Colmenares in the 2019 midterm elections.

He, however, said the opposition should consider their losing bets' defeat as a "wake-up call to re-assess their actions," instead of throwing "false and malicious narratives at the Duterte administration."

"They should have presented an alternative platform of governance and discussed how their brand of politics would be much better than the kind that the administration candidates would provide," Panelo said.

"Their loss is a clear [indication] that our people do not believe in their advocacies, especially on the war on drugs, extra-judicial killings, South China Sea, one-man rule, etc., which they have foisted and peddled to the people. The electorate has seen through the sophistry of espousing their feigned brand of nationalism for many decades, taking advantage of the poor man’s plight."

Panelo said he was hopeful that Reyes would learn to accept electoral defeat, stressing that the strategy of attacking the President at the height of the election season was "simply wrong" as it merely triggered a "backlash against the opposition candidates."

"We reiterate our call to the opposition, let us set aside our partisanship and work together for the betterment of the Filipino people," he said.

"The sovereign voice has spoken. We urge the opposition, the critics and the detractors to bow to the majesty of the rule of the majority, lest we are swept away by the rampaging tidal waves of change," Panelo added. (SunStar Philippines)