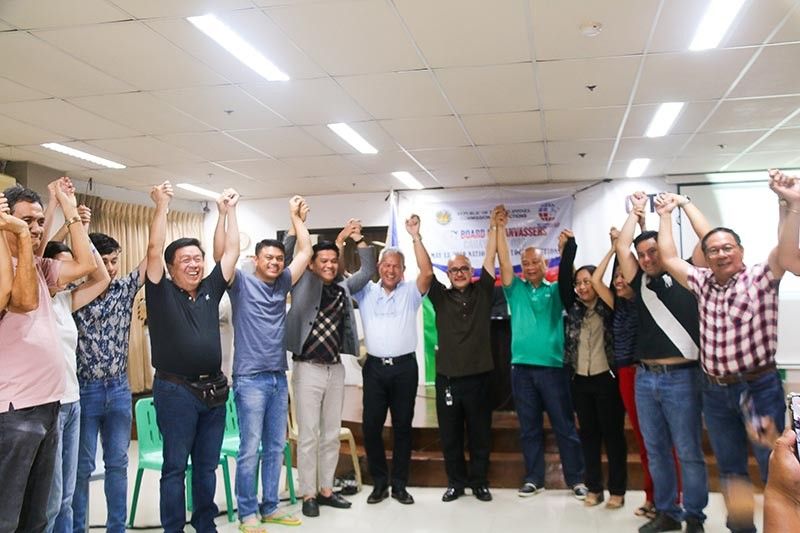 CAGAYAN DE ORO. Cagayan de Oro city election officer, Ramil Acol (center, brown coat), raises a hand of Mayor Oscar Moreno to formally proclaim him as the winning candidate for the mayoral race. Along with Moreno are winning vice mayor and city councilors who are allied with him under the local Partido Demokratikong Pilipino-Lakas ng Bayan. (Cyrill Garcia)

MAYOR Oscar Moreno credited the almost 20-0 win of his administration party to the "Kaabag vs Babag" messaging of his campaign, which he said affected the people.

The administration party, led by Moreno, won big, with only three candidates -- two councilors from each district and one congressional candidate -- lost.

All of the winners were proclaimed 8 p.m. at the session hall Wednesday, May 15, after the Commission on Elections (Comelec) approved their motion to lower the threshold of the accounted votes so far.

In an interview, Moreno said he will continue his gains during his first two terms but vowed to focus on three areas: resettlement, infrastructure for flood control and drainage, and boost the Cagayan de Oro City Water District.

"I'm very pleased. The issues have been well explained. The fight was between kaabag (one who helps) and babag (one who hinders), and I'm glad that the people saw that as the central issue of this election," he said.

"We would have wished for everyone to have make it, especially Congress, but we have to submit to the collective wish of the people, regardless of our feelings toward the results," he added.