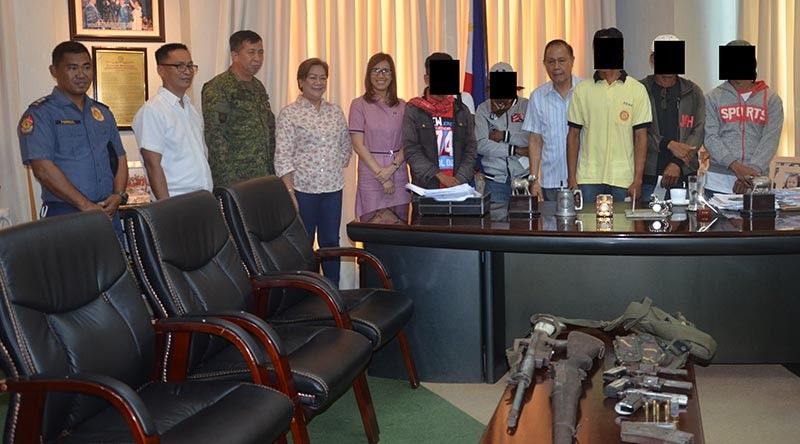 ILOILO. The rebel returnees who are recipients of the Enhanced Comprehensive Local Integration Program of the Department of the Interior and Local Government pose with Governor Arthur Defensor Sr. (4th from right), DILG Provincial Director Teodora Sumagaysay, Provincial Social Welfare and Development Office chief Dr. Neneth Q. Pador, and Col. Alberto Desoyo, commander of the 303rd Infantry Brigade, among others, after receiving their cash rewards on Friday, May 17, 2019. (PR)

SIX New People’s Army (NPA) and one Militia ng Bayan members availed themselves of financial aid from the Department of the Interior and Local Government (DILG) under its Enhanced Comprehensive Local Integration Program (E-Clip).

The former NPA rebels received P65,000, of which the P15,000 is for immediate assistance and the P50,000 is for livelihood assistance. They were from Lambunao, Calinog, Bingawan, Igbaras, and Barotac Nuevo.

The Provincial Social Welfare and Development Office (PSWDO) is in-charge of assisting the beneficiaries come up with a business plan for their proposed livelihood project. Most of them are into livestock business.

“We want to make sure that the money is used for its intended purpose,” said DILG-Iloilo Director Teodora Sumagaysay.

E-Clip is an expanded version of the program caters even to MB members. It also features expanded benefits like housing, among others.

“We are also giving P21,000 to organization or units where these Militia ng Bayan members surrendered. They mostly surrender with the Philippine Army,” she said.

The DILG director encouraged the remaining rebels to return to the fold of the government, as there are programs in store for them.