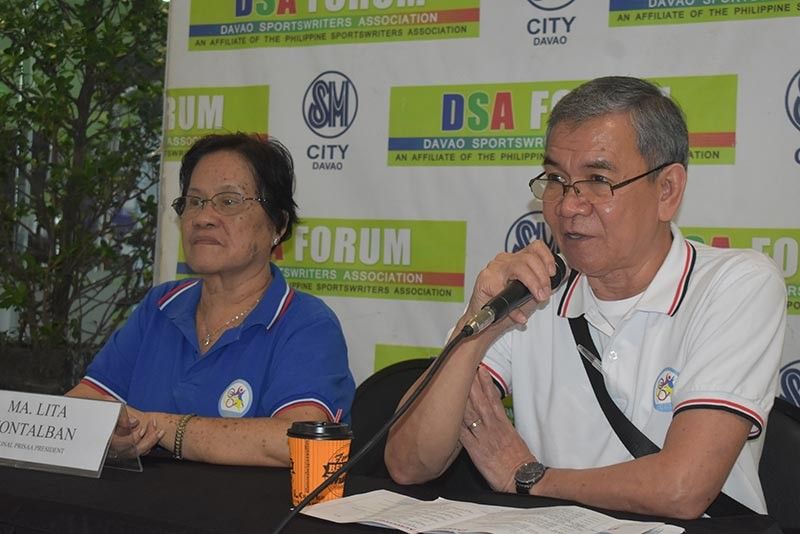 DAVAO. National Private Schools Athletic Association (Prisaa) secretary general Laureano “Boy” Santos, right, bares the rich history of the organization since it was founded in 1953 and revived in 1991 during the Davao Sportswriters Association (DSA) Forum at The Annex of SM City Davao, May 16. (Seth Delos Reyes/SDD-CMO/DSA)

THE sports scene in Davao City has been very active in 2019 with the hosting of various regional, national, and even international sports events.

One of the highlights and banner events hosted by the city this year is the National Private Schools Athletic Association (Prisaa) National Games set on May 19 to 24, 2019.

Prisaa today is the country’s largest national sports association with close to 1,200 member colleges and universities from all 16 regions.

Prisaa’s long history can be traced back to 1953 when it was first organized by then Bureau of Private Schools Director Dr. Manuel Carreon.

The first Prisaa Meet was held on March 8 to 10 at the historic Rizal Memorial Sports Complex with only a few sports including basketball, chess, cycling, football, gymnastics, tennis, softball, swimming, table tennis, athletics and volleyball.

Different cities and provinces in the country started conducting Prisaa Meets in 1956 that helped produce outstanding athletes the likes of thrower Josephine dela Viña of Cebu and sprinter Mona Soliman of Mindanao.

The Prisaa Meet was last conducted in 1972 at the Paglaum Sports Complex in Bacolod City before it was suspended in 1973 due to an experiment to integrate sports competitions for both public and private schools and out-of-school youth.

However, on July 2, 1990, then Philippine Sports Commission chairman Cecilio G. Hechanova spearheaded a meeting of sports leaders from 14 regions to revive the Prisaa. An election of officers was also held during the meeting that saw Dr. Emmanuel Y. Angeles elected as national president. Election of Prisaa regional presidents was also held in the same year.

Thus, the Games was revived on February 3-9, 1991 at the Pampanga Sports Complex, San Fernando, Pampanga and was since then held annually.

“The overarching goal of creating Prisaa is to have a competition among private schools all over the country,” National Prisaa secretary-general Laureano “Boy” Santos said.

He added that the vision is to be a forefront of sports development for student athletes of member schools and to bring pride, honor and prestige to the association.

He also said that in this year’s hosting of the national meet, Davao City won the bidding because it has facilities, security, and manpower.

“We are confident because Davao is known to be safe and peaceful and we know that the people here are very welcoming,” Santos added.

This year’s theme is “Sustaining Filipino Athlete for Global Competitiveness”.